Frogs and Toads in Tennessee 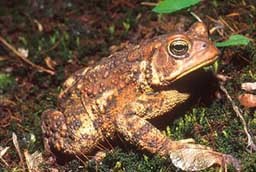 Tennessee is home to 21 species of frogs and toads.

What is the difference between a frog and toad?  In general: 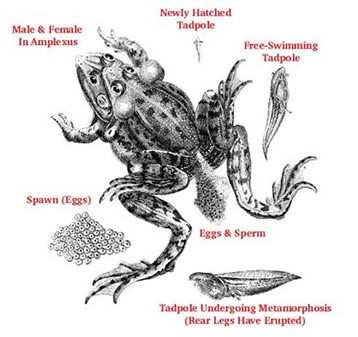 Amphibians are the class of vertebrate animals containing the Anura (frogs and toads), Urodeles or Caudata (salamanders and sirens), and the lesser known Gymnophiona (caecilians) which do not occur in North America.

Amphibians are ectothermic (cold-blooded), have smooth porous skin, primarily fertilize their eggs externally and do not have a hard shell or membrane around the eggs.

The word amphibian comes from the Greek language and means "dual life."   This refers to the lifestyle practiced by many amphibians.  The adults are primarily terrestrial (land-dwelling) and the larva (tadpoles) are mainly aquatic (live in water).

Male frogs gather at the breeding pools and begin to vocalize (call) to attract females. Females arrive at the breeding sites and seek out the most attractive males.  Those males with the deepest voices and the longest calls attract the most females.

Larger frogs have deeper voices and those frogs that are the largest and have the longest calls are the most fit.  A male grasps a female from behind and grips her behind her front legs and hangs on until mating is completed (amplexus).  During amplexus, the female expels her eggs and the male releases sperm into the water to fertilize them. This type of fertilization is called external fertilization.

The eggs are laid in jelly-like masses in groups of a few to as many as several hundred depending upon the species. The egg cells of each embryo begin to divide into more cells (egg cell cleavage) and grow to form the tadpole.  The eggs hatch within a few days.

Tadpoles remain in the water a few weeks for most species, and up to 2 years for other species, before they metamorphose.   Metamorphosis is the process in which a tadpole changes into a frog.

Natural extinctions and population fluctuations are a normal part of nature. Scientists have uncovered five mass extinctions throughout the history of earth. But the accelerated rate at which many species are now declining and disappearing is very alarming to the scientific community. It is believed we are now in the sixth mass extinction event; the first ever caused by the actions of a single species, humankind. During the past couple decades, scientists have become concerned that many of our amphibian populations are declining and some species have become extinct in areas of the world that are relatively undisturbed by man. Below are but a few examples of the many declines and extinctions of the past two decades:

The golden toad (Bufo periglenes) was first discovered in the remote and pristine cloud forests of the Monteverde Preserve of Costa Rica in 1967. This toad was very unusual because it was sexually dimorphic (the sexes could easily be identified.) The last golden toad ever seen was in 1987 and they have now been declared extinct.

The northern gastric brooding frog (Rheobatrachus vitellinus) of Australia was discovered in 1984 and last seen in the wild in 1985 following the fate of the closely related gastric brooding frog (Rheobatrachus silus) that was discovered in Australia in 1973 and had disappeared by 1981. These unusual frogs brooded their young in their stomachs and were of interest to the scientific and medical community as they ceased  [Chiricahua leopard frog] producing hydrochloric acid in the stomach when they were brooding young frogs.

In the United States, populations of the western toad (Bufo boreas) and Chiricahua leopard frog (Rana chiricahuensis) have plummeted by 80%, the mountain yellow-legged frog (Rana mucosa) has disappeared from much of its range, and recent surveys to find the Yosemite toad (Bufo canoris) in Yosemite National Park were fruitless. Two species, the relic leopard frog (Rana onca) and the Wyoming toad (Bufo baxteri) are on the brink of becoming extinct in the wild and the Vegas Valley leopard frog (Rana fisheri), last seen in 1942, is now extinct.

Population declines and extinctions are not the only problems facing amphibians today. Scientists have noted an increase in reports of malformations. Scientists believe there are three main factors contributing to the increase in malformations: increases in UV-B radiation because of the thinning ozone layer, chemical pollution (insecticides and pesticides), and parasites (chytrid fungus). These factors combined with a weakened immune system due to environmental stressors, can increase the number of malformations found in a population. Malformations come in many forms ranging from missing limbs, bones and eyes, to extra limbs, digits and eyes. Few, if any, of these malformed amphibians survive to reproduce. Tennessee does not appear to have an abnormal number of malformations, but we need to be watchful. For more information about malformations, including state maps showing reported malformations, visit the North American Reporting Center for Amphibian Malformations.

Amphibians, including the frogs and toads, around for over 360 million years, survived the mass extinction event that killed the dinosaurs. Below is relative time scale showing geologic history and when the amphibians first appeared.

Some Identified Causes of Amphibian Declines Around the World