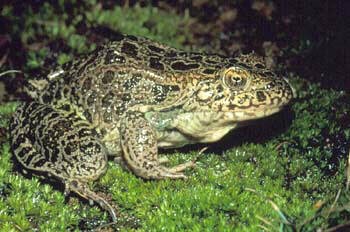 A resident of the Coastal Plain of western Tennessee, the Crawfish Frog is a shy, secretive and nocturnal species that is not often seen or heard.

Description:
A bulky, odd-looking frog, Crawfish frogs are typically 2.25 to 3 inches long. They are dark gray in color and are characterized by dark spots outlined with a light border on the back.

Similar Species:
The Gopher Frog, known only from two records in Tennessee, has a mottled belly and the dark spots that cover it are not encircled by white.

Habitat:
Crawfish frogs are normally found in lowland woods, river floodplains and wetland prairies in western Tennessee. They remain underground in the burrows of other animals, often those of crayfish, during the day.

Breeding information:
Females lay masses of 3,000 to 7,000 eggs. Eggs are attached to stems of vegetation. Metamorphosis of tadpoles takes about 2 months.

Status in Tennessee:
Crawfish Frog numbers are thought to be in decreasing across its range. Introduced carnivorous fish have been implicated in their decline.

Fun Facts:
•Crawfish Frogs are fast on land but slow in the water
•Crayfish burrows that lose their chimneys are often selected by Crawfish frogs

Best places to see in Tennessee:
Found in the western portion of the state, this solitary and secretive species is rarely seen because it spends most of its time underground in burrows.