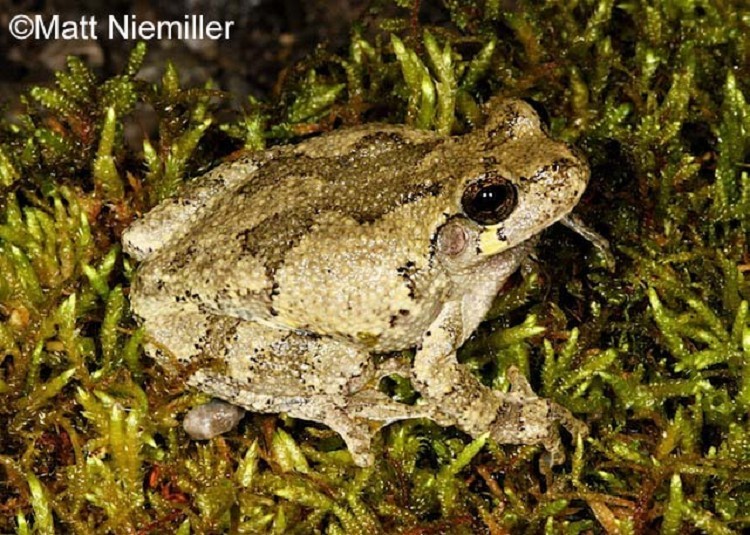 A medium-sized, tree-dwelling frog, Cope's Gray Treefrog is heard more often than seen as it spends much of its time in the tops of trees all across Tennessee.

Description:
Cope's Gray Treefrogs are 1.25 to 2 inches long. Their coloring is highly variable and is affected by factors such as season and humidity. Coloration ranges from brown and green to pearl gray. Shades of gray, with black blotches on the back, are most common. Green is seen most often during the breeding season and in yearling frogs. Typically there is a white mark below the eye. The "flash color" on the inner thigh is apricot orange.

Similar Species:
The Gray Treefrog is visually indistinguishable from Cope's Gray Treefrog. The only way to tell the two species apart is by careful analysis of the voice.

Voice:
Their call is a short, raspy trill on one pitch. It is similar to the call of the Gray Treefrog but the pulse rate is faster for a given temperature. Heard from late March through October, calling peaks May through July. Their call is quite common in the summer in a wide variety of habitats. Cope's Gray Treefrog also makes a short aggressive barking call that some people confuse with that of the Barking Treefrog.

Diet:
Tadpoles scavenge plant material. Adults typically prey on moths, mites, spiders, plant lice, harvestmen, and snails. They are, however, opportunistic and will occasionally feed on smaller frogs, including other treefrogs.

Breeding information:
Females lay eggs once per year. Males may fertilize multiple clutches. A single egg mass may contain 1,000 to 2,000 eggs that break into small, loose egg clusters of 10 to 40 eggs almost immediately upon laying. These attach to plants or other structures within the body of water. Depending upon the temperature of the water, tadpoles hatch in three to seven days. Metamorphosis occurs at about 6 weeks of age, and sexual maturity is attained they reach two years old.

Fun Facts:
•Cope's Gray Treefrogs have a high tolerance for freezing temperatures due to glycerol in their blood
•Adults have excellent hearing and are also very sensitive to ground vibrations
•Injured tadpoles release an alarm chemical warning others of nearby predators

Best places to see in Tennessee:
This species can be encountered across the state though it's heard more frequently than seen.