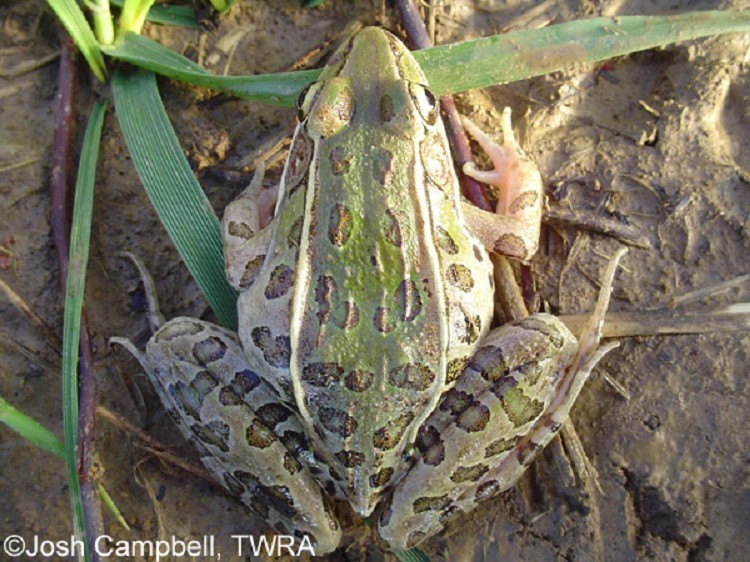 Widespread and common, the Southern Leopard Frog is often seen just as it jumps from the side of a pond or stream to the safety of the water. It is named for the leopard-like spots on its back.

Description:
Southern Leopard Frogs are 2.5 to 3 inches long. They are green and brown with dark rounded spots on the back, a light line on the lip, and a light spot in the center of the tympanum (eardrum). They have a long pointed snout.

Similar Species:
The Pickerel Frog lacks the light spot in the center of the tympanum and has square spots on its back instead of rounded ones.

Voice:
A series of clucks mixed with groans sounding much like a hand-rubbed over a balloon. Typically heard from January through the fall, with peaks in February and March, some breeding choruses can be heard into the late summer and early fall.

Habitat:
Most often found at the edges of farm ponds, creeks, reservoirs, swamps and sloughs. In the summer the Southern Leopard Frog disperse from the water and can be seen leaping through tall grasses in moist areas.

Breeding information:
Females may produce 3,000 to 5,000 eggs laid in a globular mass and attached to stems of vegetation. Eggs hatch in 7 to12 days. Metamorphosis of tadpoles takes about 2 to 3 months.

Status in Tennessee:
Common in suitable habitat except in the higher elevations of the east.

Fun Facts:
•When threatened by predators Southern Leopard Frogs prefer to swim to safety. But if pursued on land they tend to jump in a series of three jumps at a time
•Southern Leopard Frogs are consumed by humans for their legs (but this is illegal in Tennessee) and are often used for dissection in biology classes

Best places to see in Tennessee:
This species occurs statewide except for the higher elevations in the east.