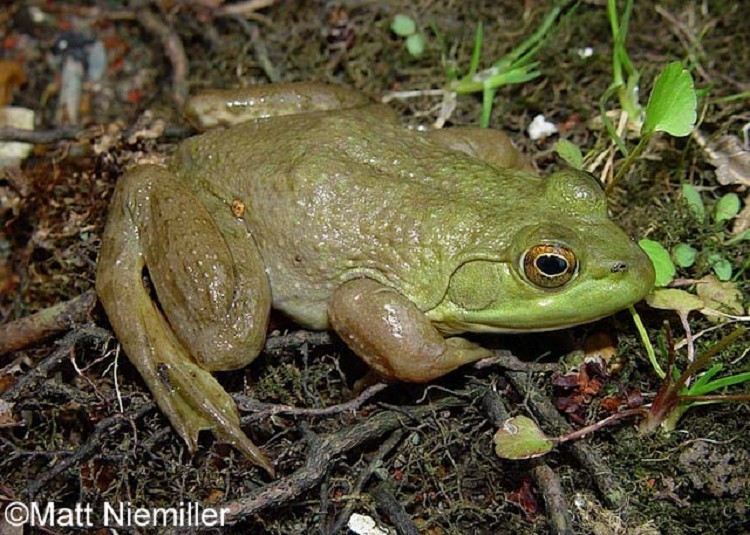 The largest native frog in the United States, the American Bullfrog is common across Tennessee in permanent bodies of water. In the frog and toad chorus, this species sings the deep bass parts, its call a sound heard often in the warmer months.

Description:
American Bullfrogs typically range from 3.5 to 6 inches long. They are green to brown in color and are characterized by a ridge curving from behind the eye around the tympanum (the "ears"). Males have bright yellow throats during the breeding season; the female's throat is white.

Similar Species:
The Green Frog has dorsolateral ridges-folds of skin running down the side of their back; the Bullfrog does not.

Voice:
Call is a loud deep "jug-o-rum". This species is heard from March through August.

Diet:
American Bullfrogs are opportunistic predators and will eat anything they can get in their mouths. Snakes, worms, insects, crustaceans, and other frogs (even their own species), make up the bulk of their diet, but bats, small land mammals and songbirds have been reported as prey items for Bullfrogs.

Breeding information:
Females lay 1,000 to 5,000 eggs in a thick surface film. Metamorphosis of tadpoles takes 1 to 2 years, and the American Bullfrog needs 2 to 3 additional years to reach maturity.

Fun Facts:
•The average bullfrog lives 7 to 9 years in the wild. The record age for a captive specimen is 16
•Humans hunt American Bullfrogs for frog legs

Best places to see in Tennessee:
Any large permanent body of water is likely home to the American Bullfrog.