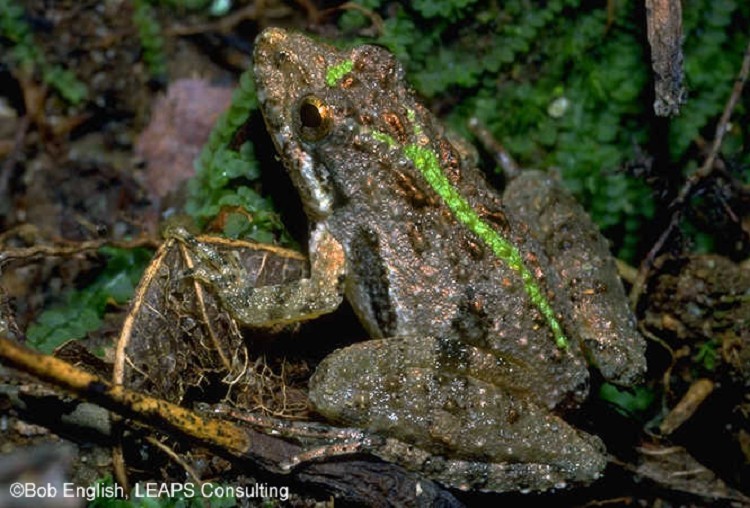 A small frog is found in lowland areas and river bottoms in the extreme southwestern part of the state.

Description:
At 0.6 to 1.2 inches, the Southern Cricket Frogs are our smallest Tennessee frogs. They have a dark triangle between their eyes and usually a bright "Y" stripe running down their back. They differ from the Northern Cricket Frog is having less than half of the longest toe on their rear feet webbed. This characteristic can be seen with binoculars at close range in the field.

Similar Species:
Distinguished from the very similar Northern Cricket Frog in having webbing on one half or less of the longest toe on the rear feet. Also, note slightly different vocalization and range.

Voice:
The call sounds like two small pebbles being tapped together though somewhat harsher than the Northern Cricket Frog. The call maintains a steady tempo. They can be heard from mid-April through August.

Habitat:
The Southern Cricket Frog is found in southwest Tennessee near semi-permanent bodies of water including shallow ponds with vegetation, meadows, creeks, and roadside ditches.

Breeding information:
Females lay up to 150 eggs at a time that she attaches to submerged vegetation or along the bottom of a shallow pool. Metamorphosis of tadpoles takes about 90-100 days. Southern Cricket Frogs become sexually mature within 1 year.

Status in Tennessee:
Common though numbers have been declining since the 1970s.

Fun Facts:
•Their lifespan averages only four months. Populations can completely turn over in six months
•The Southern Cricket Frog is a better jumper than the Northern Cricket Frog and can leap as much as eight feet

Best places to see in Tennessee:
Found in the extreme southwestern section of the state.