One of the most attractive of Tennessee's frogs, the Green Treefrog is a sleek, long-legged inhabitant of cypress swamps and marshes in the western portion of the state.

Description:
Green Treefrogs are 1.25 to 2.25 inches long. They are usually bright green with a distinct white or yellow stripe from the mouth to the thigh. Occasionally, the back is flecked with yellow. However, it may be nearly yellow when it is calling or a dull green or gray while it is inactive during cool weather.

Habitat:
These frogs are found in forested areas and swamps in western Tennessee that have abundant vegetation surrounding the shoreline.

Diet:
Green Treefrogs are insect eaters and they favor flies, mosquitoes and other small insects. They appear to be most attracted to active prey.

Breeding information:
The eggs are laid in small packets or films at or near the surface and attached to floating vegetation. The eggs are brownish to black with white or cream. Metamorphosis of tadpoles takes about one to two months.

Status in Tennessee:
Common within their range.

Fun Facts:
•Sometimes called the Rain Frog, Green Treefrogs perform a rain call when they sense a shower on the way
•This species has a parietal organ, located on the top of the head between the eyes, that is thought to assist in compass orientation and thermoregulation

Best places to see in Tennessee:
Cypress swamps and marshes in West Tennessee are home to Green Treefrogs. 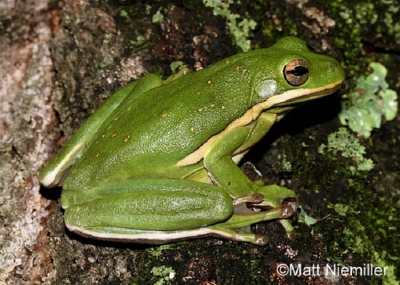