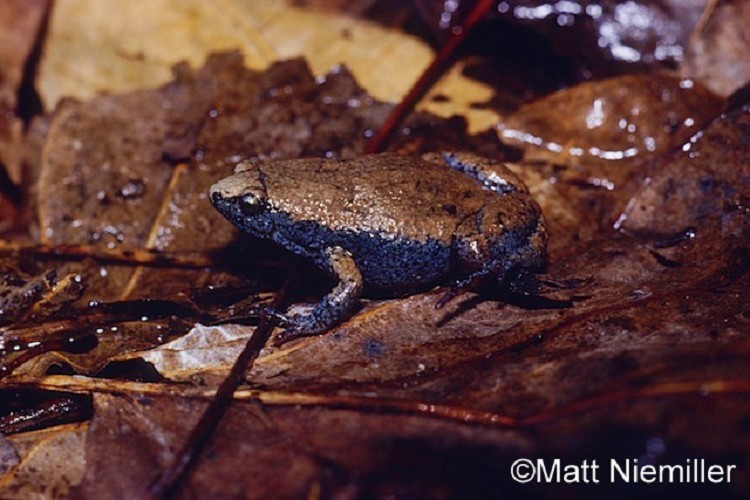 Not really a true toad, the general shape and appearance of the widespread Eastern Narrow-mouthed Toad are usually sufficient to identify this small frog.

Description:
Eastern Narrow-mouthed Toads are 1 to 1.25 inches long. They are pot-bellied, triangular in appearance with a fold of skin just behind the eyes, and have small turtle-like heads and a pointed snout. They may be gray, brown, or reddish with dark markings on the back.

Similar Species:
This species is unlikely to be confused with any other in Tennessee.

Voice:
The call of the Eastern Narrow-mouthed Toad is a high drawn-out, insect-like beeeeeeeeeeee. Many liken it to the bleating of a newborn lamb.

Habitat:
They are found statewide, except in the Blue Ridge Mountains, often under rocks, logs or in underground in burrows and old sawdust piles, in a variety of habitats including old fields and cedar glades.

Diet:
The diet of the Eastern Narrow-mouthed Toad consists mostly of insects such as beetles, termites, and especially ants. This toad has been found feeding right at the openings to anthills.

Breeding information:
Eastern Narrow-mouthed Toads are explosive breeders and heavy summer rains trigger breeding. Females lay 10 to 150 eggs in masses upon the surface of the water in shallow ponds and pools. Metamorphosis of tadpoles takes 1 to 2 months.

Status in Tennessee:
Widespread and common.

Fun Facts:
•This species is primarily nocturnal and feeds heavily on ants and termites
•The fold of skin behind the eyes of the Eastern Narrow-mouthed Toad can fold forward to remove insects that are attacking the eyes

Best places to see in Tennessee:
Common and widespread