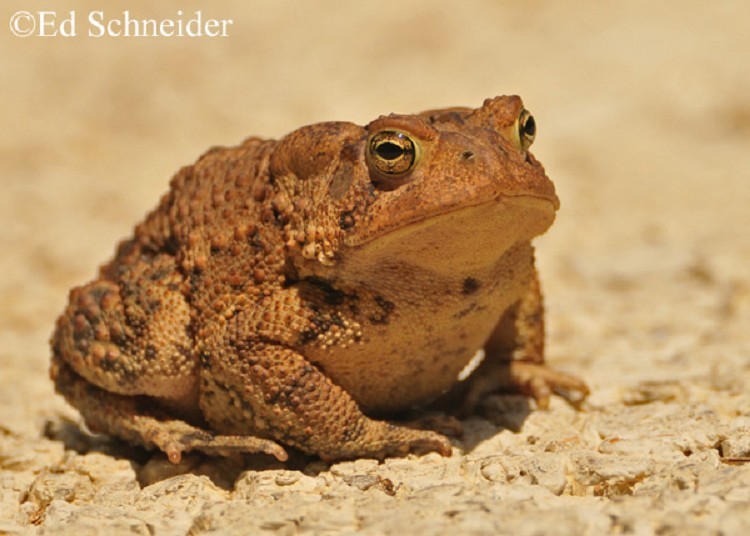 Often seen in backyards, gardens and fields, the American toad is a common and adaptable species found all across the state, limited only by access to water for breeding. Solitary and mainly nocturnal, they are most active during warm, humid weather.

Description:
The American toad is 2 to 3.5 inches long, has short legs, a stout body and thick warty skin. Brown skin color is most common, but this is highly variable and it can also be red, olive or gray. What's more, the skin color of American toads can change depending on temperature and humidity as well as physical stress. Their bellies are white or yellow. Males, which are smaller than females, have black or brown throats while females have white throats.

Similar Species:
Distinguished from the Fowler's toad by the space between the cranial crest and the parotoid glands; these features abut in the Fowler's toad. Also, the American toad has 1 or 2 warts in each of the largest spots on its back-the similar Fowler's toad has 3 or more.

Voice:
A long trill lasting between 4 and 20 seconds. Male American toads use this call to attract females, their calls becoming insistent, loud and frequent during mating season.

Habitat:
As long as they have access to water for breeding and cover for hiding during the day, American toads are found in a variety of habitats. They readily adapt to human encroachment.

Diet:
American toads are carnivores as adults, herbivores as tadpoles. Adults are generalists, consuming insects, snails, slugs and earthworms. Toads do not drink water. Instead, they absorb it through their skin.

Breeding information:
Breeding typically takes place in March or April though it may continue into July. Females lay spiral strands of 4,000 to 8,000 eggs that hatch in about a week. Metamorphosis of tadpoles takes around 2 months; American toads become mature in 2 to 3 years.

Fun Facts:
•Most American toads don't survive more than a year in the wild, but some have lived to 10 years old. One captive individual reached 36 years of age
•Like many toads, the American toad produces a milky poison from its skin. This can be toxic to humans if it comes into contact with the eyes, nose or skin
•The Eastern hognose snake, which is immune to toad toxin, specializes in eating American toads