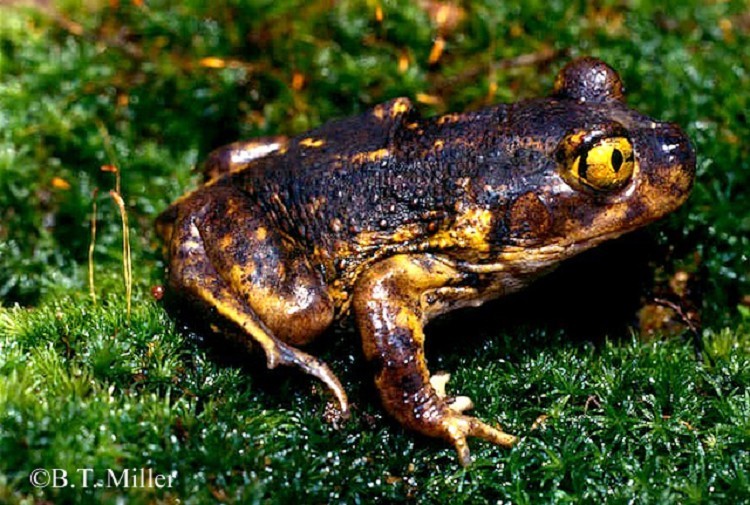 Named for the spade-like protuberance on their hind feet that they use for digging, the Eastern spadefoot is found all across the state except in the Blue Ridge Mountains. It is the only spadefoot that appears east of the Mississippi River.

The Eastern spadefoot looks like a toad, and it typically measures from 1.75 to 2.25 inches in length. Its color varies from yellowish-brown to dark brown, and some individuals may be uniformly dark gray to nearly black. Two yellowish lines, each starting immediately behind the eye, extend down the back forming the shape of a lyre or an hourglass. Another line is often found on the side of the body. The spades on the rear feet are black and sickle-shaped. The species' vertical pupils are diagnostic.

Voice:
A short, loud "BURR", similar to the call of a young crow.

Habitat:
It has a preference for forested areas with loose or sandy soil.

Breeding information:
Eastern spadefoots are explosive breeders and heavy summer rains initiate breeding. The eggs are laid in easily broken strands and attached to vegetation. Hatching occurs in 24 - 72 hours in hot weather and may take up to one week in cooler weather. Metamorphosis of tadpoles takes less than one month.

Status in Tennessee:
This secretive species spends much of its time underground. Status unknown.

Best places to see in Tennessee:
Found statewide except for the extreme northeastern part of the state.