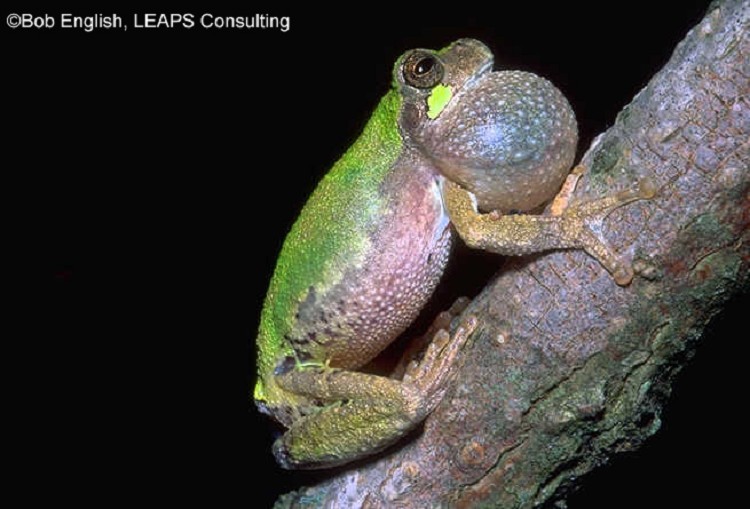 A medium-sized treefrog, the Bird-voiced Treefrog is found in swamps, creeks, and rivers in the western part of the state.

Description:
The color of these treefrogs, which are 1 to 1.75 inches long, is highly variable but they are usually gray or green with irregular marks on their back. They have a light, sometimes white, a spot under the eye, warty skin, and yellow-green to pale green "flash colors" on the hidden part of their thighs.

Similar Species:
The Gray Treefrog has yellow-orange on the concealed surfaces of the thigh.

Voice:
A ringing, somewhat birdlike whistle repeated 20 or more times. Some liken the call to the sound of someone whistling for their dog. They begin calling in mid-April and continue through August.

Habitat:
The Bird-voiced Treefrog is found in bottoms, sloughs, and swamps along rivers and large creeks in the western portion of the state.

Status in Tennessee:
Common in appropriate habitat and range.

Fun Facts:
•Bird-voiced Treefrogs are nocturnal and arboreal, coming from the trees only to breed
•The bright "flash colors" on the thighs of treefrogs (which are hidden when the frog is at rest) is thought to visually confuse predators

Best places to see in Tennessee:
Swamps in West Tennessee are good locales to find this species.