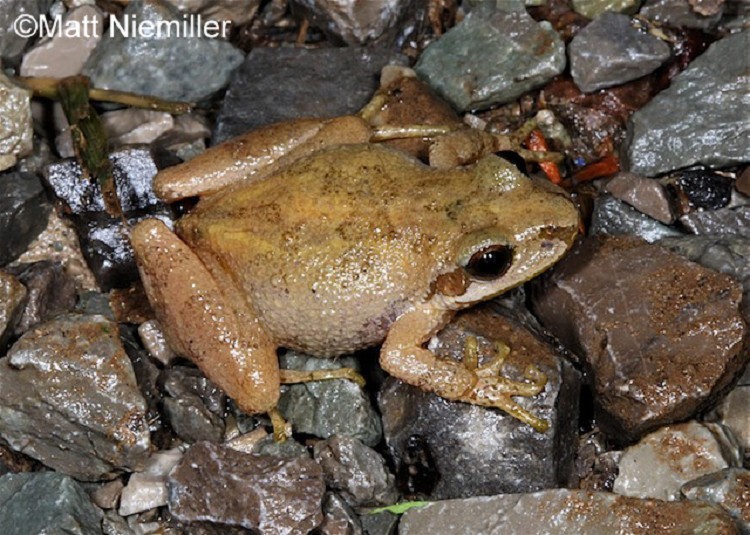 A small frog typically found in upland woods and hillsides at elevations up to 3,500 feet, the Mountain Chorus Frog is a drab species that blends in well with its forest surroundings.

Description:
Mountain chorus frogs are 1 to 1.25 inches long. They are brown, gray, or olive with a dark triangle between the eyes, a light line on the upper lip, yellow on the concealed surfaces of the hind legs, and two stripes in the form of reverse parenthesis on the back.

Similar Species:
The Spring Peeper lacks the white line on the upper lip. The Upland Chorus Frog has three longitudinal stripes that may be broken into spots.

Voice:
A series of fast, low-pitched clicks that sound like REEK-raaack. Some say it sounds like a squeaky wagon wheel.

Habitat:
This species is found at higher elevations in the Cumberland Plateau and the eastern mountains, chiefly on hilltops and forested slopes, and often far away from water. They breed in ditches, pools along streams and even in tire ruts along gravel roads in the mountains.

Diet:
Small invertebrates make up the diet of the Mountain Chorus Frog.

Breeding information:
Females lay eggs in groups of 10 to 50, laying as many as 400 eggs. Egg masses are attached to vegetation in ditches or pools. Metamorphosis of tadpoles takes about 2 months.

Status in Tennessee:
Common within its range.

Fun Facts:
•The Mountain Chorus Frog does not climb much, and then only into weeds to pursue insects
•The species occurs in three geographically disconnected areas