Large and colorful, the Barking Treefrog, which gets its name from its doglike call, is primarily a species of the southern Coastal Plain but it occurs in several parts of Tennessee.

Description:
The state's largest treefrog at 2 to 2.6 inches, the Barking Treefrog is bright green with a yellow stripe on its sides. Note the very large toe pads and the heavy granulation of the skin on its back. These are useful characteristics to distinguish this species from the similar Green Treefrog. Dark spots may or may not be present on the back.

Similar Species:
The Green Treefrog can be confused with the Barking Treefrog. The latter has more skin granulation on its back.

Voice:
The Barking Treefrog's call is a short hollow-sounding aaark aaark similar to the sound of a beagle on the hunt. It also makes a raspy call at dusk before descending to the water. The species is heard from June through August.

Habitat:
Found in wet woodlands, shallow ponds, and cypress swamps, Barking Treefrogs are both climbers and burrowers and will use habitat between those two extremes. During hot, dry weather they often take refuge by burrowing into sand or by hiding underneath vegetation.

Diet:
Barking Treefrogs are opportunistic, feeding primarily on insects-crickets is a favorite-and they will take prey both on the ground and in the trees.

Breeding information:
Females deposit single eggs on the bottom of ponds or pools. A single female may produce as many as 2,000 eggs. Metamorphosis of tadpoles takes about one to two months.

Status in Tennessee:
Common within their range.

Fun Facts:
•Barking Treefrogs are often used in the pet trade because they make good terrarium pets
•This species is solitary and nocturnal, typically resting during the day in the tops of trees

Best places to see in Tennessee:
This frog occurs in four separate regions of the state: the Cumberland Plateau; the Coastal Plain of west Tennessee; the eastern Highland Rim and north-central Tennessee (and southern Kentucky). 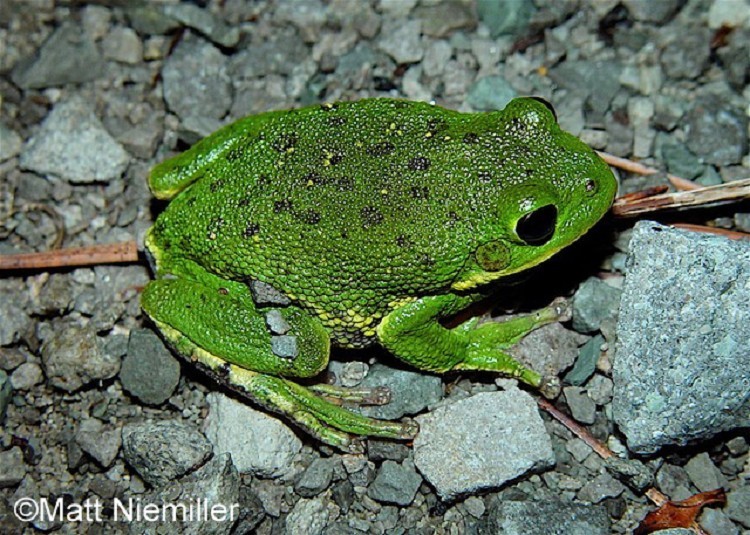