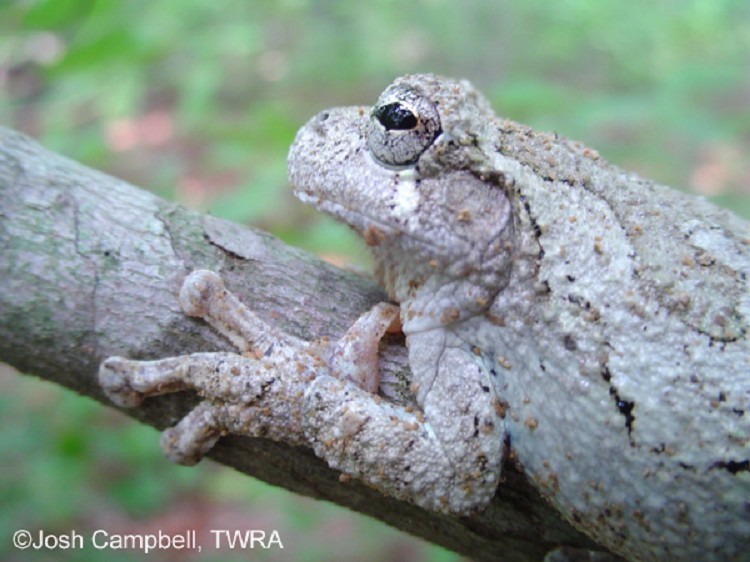 A lookalike of the Cope's Gray Treefrog, the Gray Treefrog is a tree-dwelling species that is rarely seen on the ground. It's extremely well camouflaged and blends in with the bark of trees.

Description:
Gray Treefrogs are 1.25 to 2 inches long. Their coloration is highly variable but usually gray or green with irregular markings on the back. They are characterized by a white spot under the eye, warty skin, and yellow-orange on the concealed surfaces of the thigh.

Similar Species:
The Cope's Gray Treefrog is indistinguishable from the Gray Treefrog. Only through careful analysis of the call and chromosomal examination can the two be told apart.

Voice:
Their call is a short high trill, slower and a little more musical than the Cope's Gray Treefrog. Typically heard from May through July.

Habitat:
Gray Treefrogs inhabit all elevations of wooded areas near temporary and permanent waters in a wide variety of habitats including swamps, ponds, lakes, old fields, thickly wooded suburban neighborhoods, farm woodlots, and mixed or deciduous forests. During the summer months, they are most often found in damp rotten logs or hollow trees. However, they are rarely seen outside of the breeding season as they forage in the canopy.

Diet:
As tadpoles, they forage on algae. Adults consume a variety of invertebrates including mites, spiders, plant lice, and snails.

Breeding information:
Females lay clusters of 10 to 30 eggs that are attached to vegetation near the surface of the water. The eggs hatch in 3 to 6 days. Metamorphosis of tadpoles takes from 1 to 2 months, and maturity is reached in 2 years..

Fun Facts:
•The Gray Treefrog is thought to have evolved from the Cope's Gray Treefrog during the Ice Age when an isolated population began passing on the second set of chromosomes. This characteristic allows the two species to be separated by microscopic analysis
•Although the closely related Gray Treefrog and Cope's Gray Treefrog have overlapping ranges they do not interbreed. Females respond only to the calls of the males of their species

Best places to see in Tennessee:
Their distribution in Tennessee is not well known, and some range maps indicate statewide distribution. Other sources maintain that the species is found primarily in the western portion of the state.