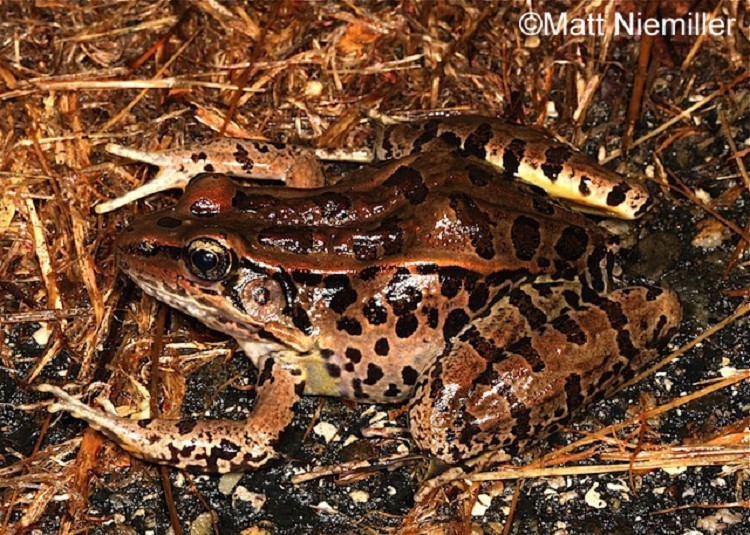 Often found in and around bodies of cooler water such as springs, the boldly marked Pickerel Frog is relatively large and widespread.

Description:
Among the most attractive of Tennessee's frogs, Pickerel Frogs are typically 1.75 to 3 inches long. They are brown, copper or green and are characterized by distinctive square spots in two rows down the back, and bright yellow to orange splotches on the inner surfaces of the upper thighs and groin.

Voice:
A low-pitched snore, sounding like "yeeeeooow", lasting 1 to 2 seconds, is generally heard in late March and into April.

Habitat:
Pickerel Frogs typically inhabit cool wooded streams and can be found in creeks, springs, ponds and reservoirs. However, they often wander into grassy fields and weedy areas during the summer.

Diet:
Pickerel Frogs are carnivorous and they consume mostly small insects and other invertebrates.

Status in Tennessee:
This species occurs across the state but is relatively rare in the Coastal Plain of West Tennessee.

Fun Facts:
•Pickerel Frogs are sometimes found in the twilight zones of caves, especially during extended periods of hot weather
•One of the few poisonous frogs found in the U.S., Pickerel Frogs produce toxic skin secretions that can be irritating to humans and deadly to small animals
•Many frog-eating snakes avoid the Pickerel Frog