After following TN 341 for 3.6 miles, turn south (right) onto US 25E.  Turn east (left) in 4.5 miles onto Rankin Hill Road.  This intersection is after you cross the US 25E bridge over Dutch Bottoms; see below for instructions on birding this area.

After 3.8 miles, you will reach the intersection of Rankin Hill Road and Hill Road (coordinates 36.05303 N, -83.21597 W). Turn left to enter the main Rankin Bottoms area or right to approach Rankin Bridge.

Alternatively, to avoid the narrow and curvy Rankin Hill Road, continue on US 25E for 5.3 miles, turn left onto Industrial Road, and follow the directions in the next paragraph.

If approaching from the northeast on I-81, take Exit 8 and head south on US 25E for 6.5 miles to the bridge over Dutch Bottoms. Then follow the directions in the first paragraph of this section.

BOAT LAUNCH LOCATIONS: TWRA boat ramps are located at Rankin Bridge (off of Industrial Rd.),  Leadvale (on Leadvale Rd, east of 25E, 2.4 miles north of Walters Bridge), and at Walters Bridge. See TWRA Boat Ramp access. Kayaks can also be put in on the water by the coal tipple on Rankin WMA (36.077511, -83.23835) or further out towards the point at the end of the gravel road.

Access: Multiple points of entry, primarily foot travel and boat only. Road access is available when Douglas Reservoir is at winter pool. The road may be rough due to being flooded 6-8 months of the year.

Big game, small game, and trapping are the same as statewide seasons, except as noted.

Closed to hunting March 1 through the fourth Friday in Aug., except for spring turkey and spring squirrel.

Coyotes may be taken on big game hunts with devices legal for that hunt. No dogs are allowed while coyote hunting.

No permanent blinds. All decoys, temporary blinds, blind materials, and boats must be removed at the end of legal hunting hours.

Site Description:  Rankin WMA, 1,255 acres, is composed of islands and floodplains that are submerged during the warm season impoundment of Douglas Reservoir.  In late spring, summer, and early fall, the area consists of mudflats, open shallows, and both inundated and dry floodplain forests.

The area is approximately 65% open, treeless floodplain; 25% black willow/buttonbush/cottonwoods; and 10% mid to late mixed floodplain forest. Virtually the entire area is under 1'-15' of water from mid-May through July.

Maximum ground exposure lasts roughly from mid-October until late March.  The amount and proportion of habitats vary with the reservoir level. Lake elevation ranges from about 995' to about 950'. Migratory shorebird habitat is most extensive from 988 to 978'; no mudflats are found above 992'.

Wildlife to Watch: This is the premier site in East Tennessee for warm-season waterbirds.

The majority of Tennessee's ducks and geese have been found here in winter, along with Bald Eagles, Sandhill Cranes, Tundra Swan, and a variety of sparrows.

Gulls and terns can be also numerous on upper Douglas Lake. In all, there have been a total of 89 waterbird species documented.

Rankin Bottoms holds and attracts full complements of species dependent on mudflats and forested wetlands. There are at least 3 active Osprey nests within the wildlife management area and several additional ones nearby. 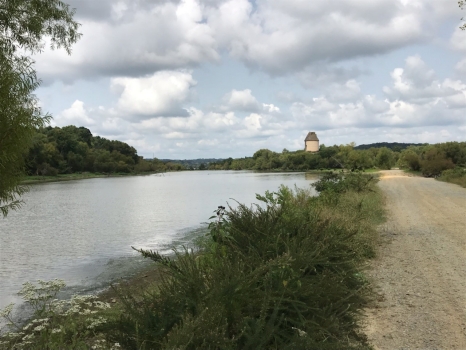