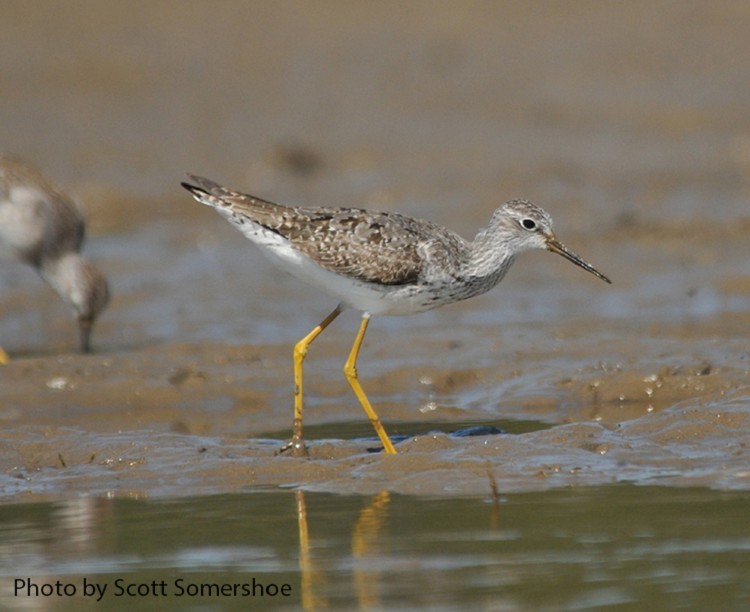 The Lesser Yellowlegs is a graceful, slender, medium-sized shorebird recognized by its bright yellow legs and distinctive tu tu call.  It is an active forager, often running in shallow water to catch prey.

The breeding range extends from central Canada westward through Alaska and they winter throughout Central and South America, the West Indies, and the southern United States.

The Lesser Yellowlegs migrates through Tennessee each spring and fall and is fairly common in appropriate habitat statewide.

Description: Medium-sized active shorebird with bright yellow legs, thin neck, long dark bill, an upright stance, and square white rump patch. The body is grey brown on top and white underneath; the neck and breast are streaked with dark brown. In fall and winter, it is grayer overall.

Males, females and juveniles are similar in appearance.  Bill length is only slightly longer than the length of the head, which is important in distinguishing this species from the Greater Yellowlegs.  Distinctive call can also be helpful in identification.

Nesting and reproduction: Lesser Yellowlegs has not been documented nesting in Tennessee.

Status in Tennessee: Fairly common migrant statewide. They arrive in spring as early as mid-March and linger through May. The first southbound migrants arrive in early July and can be found through November. There are very few winter records. The global population appears stable.