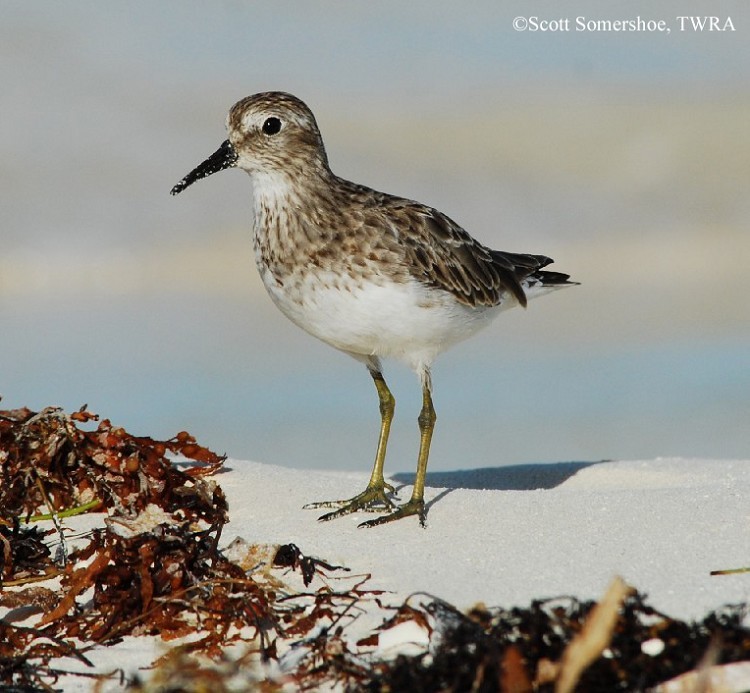 The Least Sandpiper is the smallest shorebird in the world.  It is usually found on inland mudflats or wet grassy areas rather than wading in water.  It breeds in the North American tundra and in bogs in the northern boreal forest.  This bird spends the non-breeding season in the southern United States and northern South America.

In Tennessee, it is a common migrant and a rare winter resident.  It is most likely to be found from mid-March through May and then again from early July to mid-October.  The Least Sandpiper can be found across the state of Tennessee.

Description: Unlike other small sandpipers the Least Sandpiper has yellowish legs. The bill is dark with a fine slightly drooping tip.  The belly is white year round and the rump and tail are black.  The back of breeding adults is reddish brown and black and the breast is heavily streaked.

The back and chest of birds in non-breeding plumage is a relatively dark grayish brown.

Juvenile birds (April-September) are similar to adults but have a brighter more scaly pattern on the back.

Nesting and reproduction:  Least Sandpipers breed in the North American tundra and in bogs in the northern boreal forest.  They have never been documented nesting in Tennessee.

Status in Tennessee:  Fairly common migrant across Tennessee, and a rare winter resident. Migrants start arriving in mid-March and linger through May into early June.  Early southbound birds arrive just weeks later in late June or early July. A few birds may be found in almost any month of the year.  The population appears to be stable.

Best places to see in Tennessee: The majority of places that have shorebirds are likely to have Least Sandpipers in season, including Cross Creeks NWR, Old Hickory Lake, and Rankin WMA.