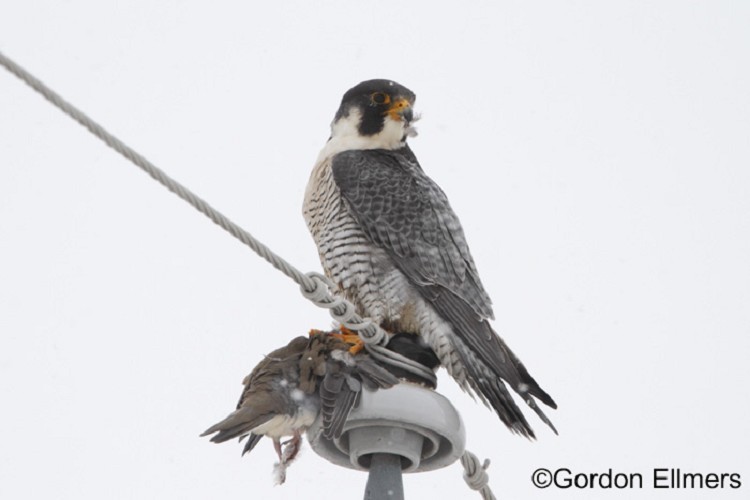 The Peregrine Falcon is famous for being the fastest bird in the world (although it isn't because the Rufous Hummingbird is actually faster but less impressive).  When in pursuit of prey, it can reach speeds of over 200 mph!

It also can be found nearly everywhere on Earth, with the exception of New Zealand and Antarctica!  In eastern North America, it wasn't able to escape the effects of the pesticide DDT and was wiped out in this region by 1965.

Historically in Tennessee, there were approximately 25 eyries (falcon nest sites) located in the eastern mountains.  There were only a few nest records from the northwestern part of the state.  By the late 1940s, there were no known active nest sites.  The decline in Tennessee happened a couple of decades before DDT was introduced into the environment and the reason for their decline is not known.

Currently (2009-2013) there are 1-2 active eyries, both in the Great Smoky Mountains National Park in Tennessee.  The Peregrine Falcon winters through most of its breeding range, retreating from the northernmost areas.  It can be found in Tennessee during any season, but it is never common.

Description: The Peregrine Falcon is a medium-sized hawk with a bold black "mustache" mark on the face and white cheeks behind the black mustache.  The wings are long and pointed, the back and wings are bluish gray, the head is blackish.

The underparts are whitish with a variable amount of black spotting and barring. First-year birds are brown with streaking on the breast and have the bold mustache mark. As with other bird-eating raptors, the female is larger than the male.

Habitat: Found in a variety of open habitats, including along lakes, rivers, mountain cliffs, and bluffs. It can also be found in large cities.

Diet:  Peregrine Falcons mostly eat birds, from songbirds to small geese, but also bats and other small mammals.  They favor shorebirds and pigeons in Tennessee.

Nesting and reproduction: Nest sites, or eyries, can often be found by whitewash on the ledge that the nest is on.  This whitewash is excrement produced by both adults and young. Eyries are usually used for many years.

Incubation: The female does most of the 4 weeks of incubation.

Fledging: Both parents feed the young, which fledge in 6 to 8 weeks, and remain dependent on the adults for another 2 months or more.

Nest: The nest is a shallow, unlined scrape in the loose material of a cliff or building ledge that has a protective overhang.  Old Raven and hawk nests are sometimes used, and rarely the cavity of a large tree (historically in northwest TN). Sites are usually high, 100 feet or higher, with a commanding view.

There are currently 2 active eyries in the state both in the Great Smoky Mountains.  A third eyrie, on a railroad bridge below Chickamauga Dam in Hamilton Co., was active for many years but abandoned when the breeding male died in 2007.

The Peregrine Falcon was removed from the federal list of Endangered Species in 1999 but remains listed as Endangered in Tennessee.

Best places to see in Tennessee: The best time to see migrant Peregrine Falcons is from late September to early October, especially on the Cumberland Plateau, the eastern mountains, and along the Mississippi.

A nesting pair can often be seen on the Alum Cave Trail, in Great Smoky Mountain National Park.