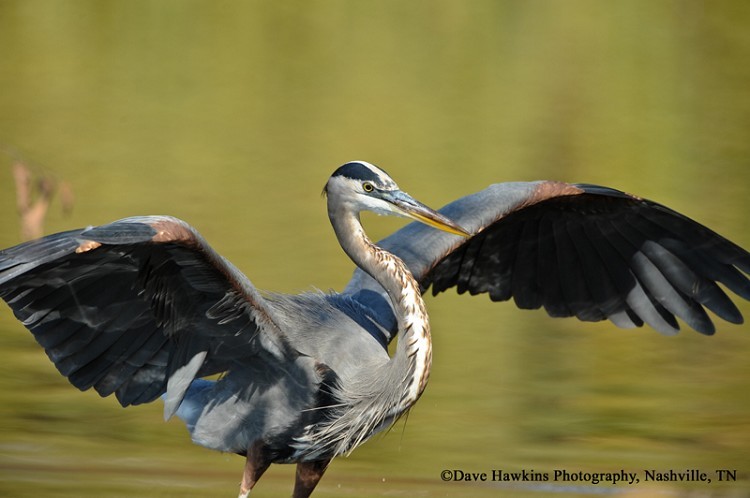 The Great Blue Heron is the largest and most familiar heron in Tennessee.   It is a year round resident and often mistakenly referred to as a “crane”.

The Great Blue Heron is widespread across North America in both saltwater and freshwater habitats from southern Alaska and central Canada southward to northern Central America and the Caribbean.

It spends the winter throughout most of its breeding range, with some individuals migrating to southern Central America and northern South America.

Description: This large, mostly gray heron has long legs, a long “S” shaped neck, and a long yellowish bill. The head is white, aside from a black stripe that extends over the eye forming a plume on the back of the neck. The legs are brownish or greenish with rust colored thighs. In flight the Great Blue Heron typically holds its head in toward its body and looks enormous with its six-foot wingspan.

Habitat: In Tennessee the Great Blue Heron is found along lakeshores, rivers, ponds, streams, and occasionally grassy fields near water. Nesting colonies are often located on islands or in wooded swamps, locations that discourage predation by snakes and mammals.

Diet: Fish, invertebrates, amphibians, reptiles, birds, and small mammals. When foraging they walk slowly, stand and stab prey with a quick lunge of the bill.

Nesting and reproduction: Great Blue Herons begin reoccupying nest sites on warm days as early as January; peak egg laying is about mid-March. Nesting colonies, sometimes numbering several hundred pairs, are typically located near water and may include other species of herons. Individuals usually do not nest until at least 2 years old.

Clutch Size: Usually 3 to 4 eggs, occasionally up to 7.

Incubation: Both adults incubate the eggs for 28 days.

Fledging: Both parents regurgitate food for the nestlings, which fledge when about 60 days old. The young continue retuning to the nest to be fed by the adults for another few weeks.

Nest: Both adults build the large platform nest of sticks and line it with dry grass, leaves, or smaller twigs. Nests from previous years are often rebuilt. Nest heights range from 10' to 130'.

Status in Tennessee: The Great Blue Heron is a fairly common permanent resident across the state. Colonies may contain other heron species and have a few to several hundred pairs.

Great Blue Herons were listed as In-Need-of-Management from 1976 to 1986, but were removed when the population began to increase. There has been a steady growth in the number of colonies and individuals in the state since the 1980s.

Best places to see in Tennessee: Great Blue Herons can be found statewide around lakes, rivers, farm ponds, streams, and occasionally in pastures.