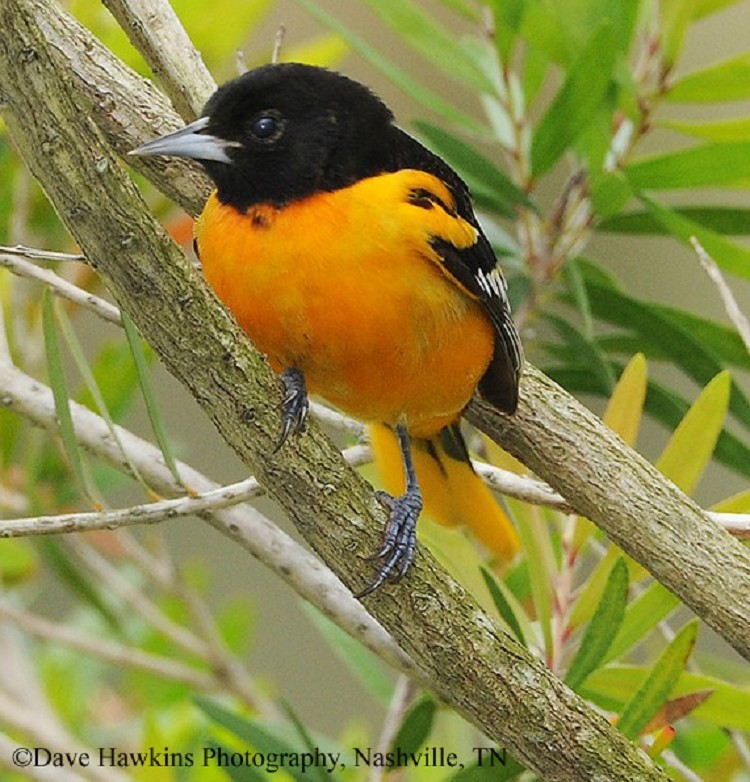 The male Baltimore Oriole is a brilliant orange-and-black bird. Mark Catesby first described it in 1731, naming it for Lord Baltimore, the colonial proprietor of the Maryland colony, whose family coat-of-arms was orange and black.

It is no surprise that this oriole is the state bird of Maryland today.  This species can be found in Tennessee from late April through early September. It is fairly common during migration, but only breeds in scattered locations across the state.

Its breeding range extends from central Canada eastward across the United States, and in winter it migrates in flocks to southern Mexico, Central America, and northern South America, with some birds wintering in Florida and the Caribbean.

The female is variable but similar to the male; she is often brownish where the male is black, a duller orange below, and has dark wings with two white wingbars. First-year males and females (August-March) resemble the adult female but are paler. Males do not reach adult plumage until their second fall.

Voice: The song is a variable series of rich, clear, whistled notes. The call is a dry, harsh chatter.

Nesting and reproduction: Egg laying peaks in mid-May in Tennessee, and only one brood is raised per season. Baltimore Orioles only rarely nest at the same site in consecutive years.

Incubation: The female incubates the eggs for 12 to 14 days.

Fledging: Both adults feed the young, which fledge in 12 to 14 days.

Nest: The female weaves the distinctive deep pouch nest from long strips of milkweed and other plant fibers, occasionally using string, hair, bits of rags, or fishing line. The nest is attached by its rim to the fork of a tree branch near the outer edge of the canopy. Sycamore trees are the trees most frequently used in Tennessee. Nest height averages 28 feet above the ground, with a range of 12 to 75 feet.

Status in Tennessee: The Baltimore Oriole is an uncommon summer resident and a fairly common migrant in the state. It is present from late April through early September. The population in Tennessee appears to be increasing.

Best places to see in Tennessee: Baltimore Orioles are most easily seen in open deciduous woodlands during spring and fall migration across the state. They nest in scattered locations along rivers and reservoirs statewide.