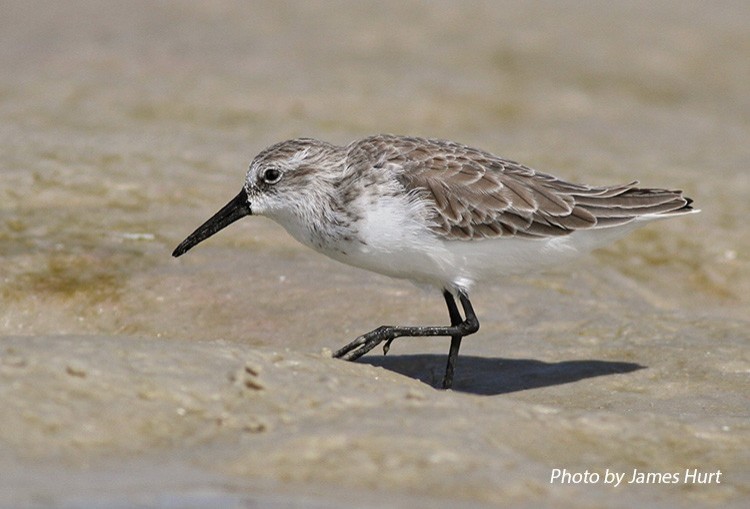 Despite its restricted breeding range in eastern Siberia and northwestern Alaska, the Western Sandpiper is the most abundant shorebird species in North America with a population in the millions. It migrates to the coasts of North and South America, and is a rare spring and uncommon fall migrant in Tennessee. It can be found in areas where other species of shorebirds congregate from mid-April to late May, and from early July through mid-October.

Description: This small shorebird has a short neck, a moderately long bill with a slightly drooping tip, a white belly, and the rump and tail are black. The back of breeding adults is scaled chestnut brown, and the breast is heavily spotted. The back and chest of birds in non-breeding plumage is gray-brown. Juvenile birds (March - August) are similar to adults but have a more scaly pattern on the back.

Nesting and reproduction: Western Sandpipers breed in eastern Siberia and northwestern Alaska. They have never been documented nesting in Tennessee.

Status in Tennessee: Rare spring and uncommon migrant in Tennessee, usually found in areas traditionally used by migrating shorebirds statewide. Spring birds are typically found from late April through May, and from early July through mid-October in fall. Populations appear to be stable.

Best places to see in Tennessee: High-use shorebird areas such as Old Hickory Lake and Rankin WMA are good places to search.