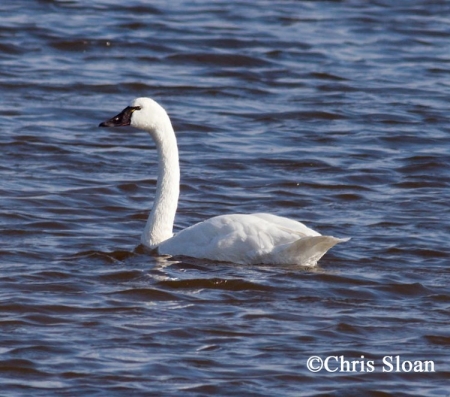 The Tundra Swan is a true tundra-nesting species with a breeding range that stretches from northern Alaska across northern Canada.  While it is a rare migrant and winter resident across Tennessee, it is the most likely swan to be found in the state. T

he majority of the population winters in large flocks on the Pacific and mid-Atlantic coasts; in Tennessee,  Tundra Swans are usually found alone or in small family groups on lakes and ponds.

Description: This pure white swan has a long, straight neck, a rounded head, and black legs and bill.  The bill is slightly concave and sometimes there is a yellow spot in front of the eye.

Voice: The call is a high-pitched yodel or barking. Distant flocks sound like baying hounds.

Habitat: In Tennessee, more likely found on smaller lakes and ponds, than on larger bodies of water.

Nesting and reproduction: The Tundra Swan has never been known to nest in Tennessee.

Status in Tennessee: The Tundra Swan is a regular, but rare migrant and winter resident across the state, arriving by early November and departing by mid-March. It is illegal to hunt any species of swan in Tennessee.