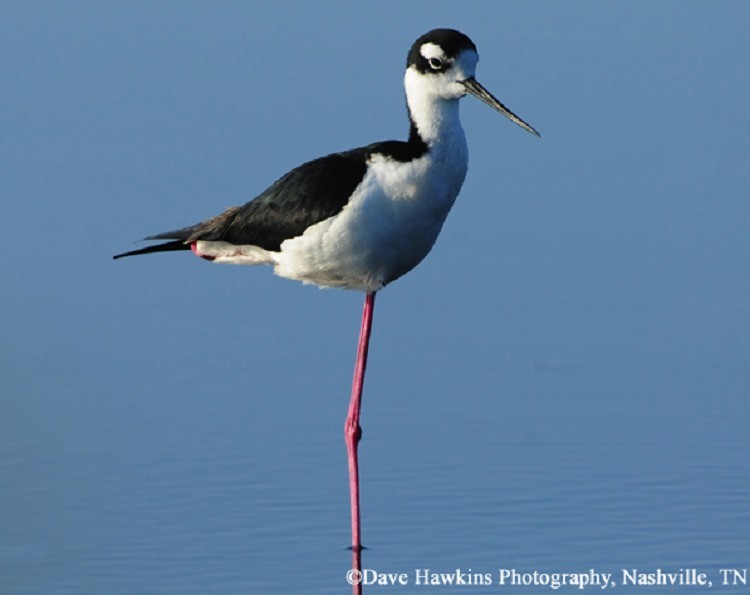 The Black-necked Stilt is an elegant black-and-white shorebird with a long neck, and long red legs. It only started nesting in Tennessee in the early 1980s and nesting is still restricted to the southwestern corner of the state.

It is found around lakes and shorelines, and breeds in California and some western states, along the Gulf and Atlantic coasts, and south into Mexico and parts of South America; during the winter it retreats from the northern parts of the range to join birds in Mexico, southern Florida, and the Caribbean.

Stilts have been expanding their breeding range up the Mississippi River to Missouri over the last 30 years and are now fairly common nesting birds. Black-necked Stilts are present in Tennessee from early April through late September.

Description: A large shorebird with a long neck, long, straight, black bill, and long, thin, red legs. Top of head, back of neck, back, and wings black contrasting with the white face, throat and underparts. Male, female and juvenile similar, but female's back is actually dark brown, and juvenile back feathers have buff margins.

Voice: A very vocal species with a loud, sharp taawh or pleek, which is often incessantly repeated.

Similar Species: American Avocet also has a long neck, long bill, and long legs, but head and neck are pale, legs are bluish-gray, and the is bill obviously upturned.

Nesting and reproduction: Black-necked Stilts typically nest in loose colonies and defend an area of about 50' around the nest.  The first nest in Tennessee was in 1982 at the Ensley Bottoms, where they still nest today.

Incubation: Both adults incubate for 25 days

Fledging: Precocial young leave the nest within hours of hatching, but are closely protected for 4 to 5 weeks until independent.

Nest: In Tennessee, nests are usually placed on a small raised hummock with some vegetation.

Best places to see in Tennessee: The TVA Lakes area is one of the places in Shelby Co where they can be found nesting as the Ensley Bottoms (aka the Pits) is not being managed with shallow water habitat anymore.