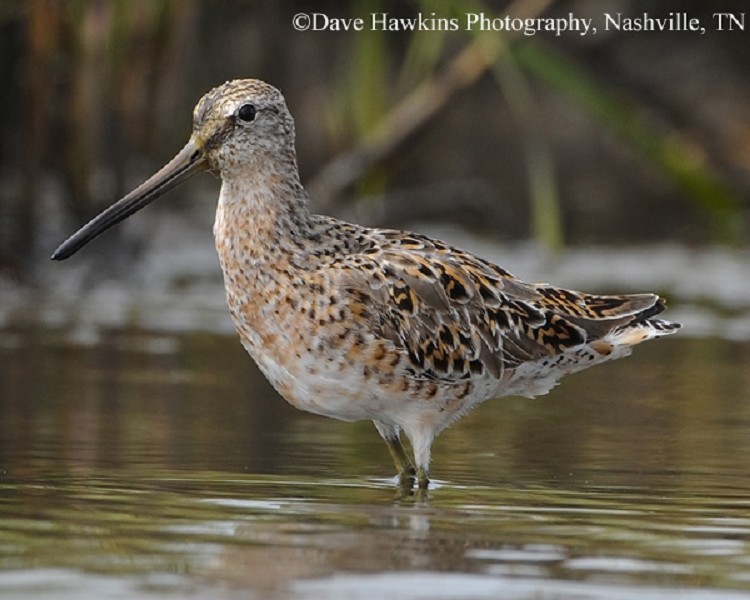 The Long-billed and the Short-billed Dowitcher can both be found in Tennessee, especially during fall migration, but it's the Short-billed that is more often encountered.  These medium to large-sized shorebirds both have very long bills.

The Short-billed's bill is only short in comparison to the Long-billed Dowitcher's bill, and the bill of the female Short-billed is the same length of that of the male Long-billed! Their rapid probing in the mud while foraging is often described as like a "sewing-machine."

Both will forage day or night, and readily swim. Range, habitat, and vocalizations should all be used to help distinguish between these two species. The Short-billed Dowitcher breeds nearly from coast to coast across boreal and subarctic regions of Canada and Alaska, and winters along the Atlantic and Pacific coasts from Oregon and Virginia to Peru and Brazil.

Description: This medium to large-sized shorebird has a bill that is twice as long as its head, and moderately long, pale legs. In flight, it shows a distinctive white blaze up its back, as does the Long-billed Dowitcher.  In spring breeding plumage (April-August) it is reddish below and mottled-brown above; in fall (September-April) it is gray above and pale below.

Immature birds (July-November) have a buffy chest and flanks, but are more plain than breeding adults. A key to distinguishing immature Short-billeds from Long-billeds is that the tertials of the Short-billeds are "tiger-striped," rather than plain with rusty edges. The female has a longer bill than the male.

Voice: Call is lower than that of the Long-billed Dowitcher, and is a liquid, rapid, slightly descending kewtutu.

Habitat: In Tennessee, Found on mud flats and along lakes and ponds.

Nesting and reproduction: Neither Short-billed nor Long-billed Dowitchers have ever nested in Tennessee.

Status in Tennessee: The Short-billed Dowitcher is a regular uncommon migrant found across the state. It is more likely encountered in fall than spring, and expected in the state from late April to mid-May, and from mid-July to late September.