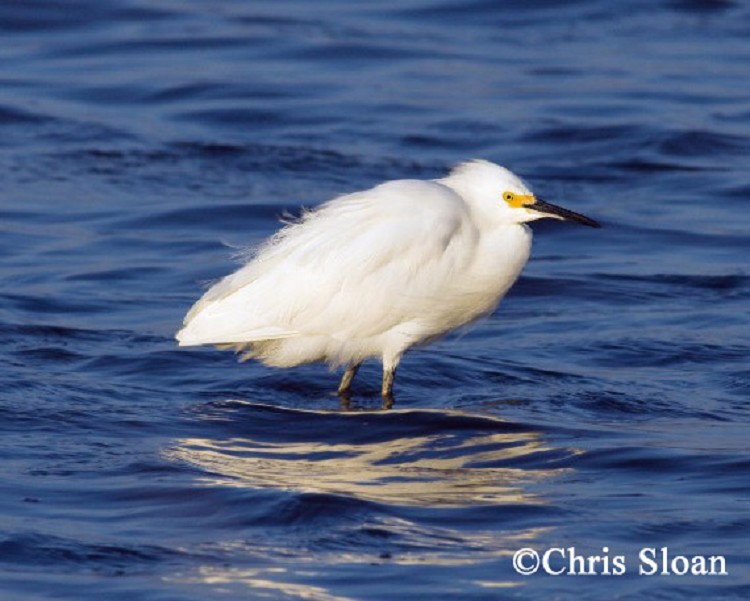 The Snowy Egret is a small, active, and elegant white heron easily recognized by its dark legs and yellow feet.   During the breeding season, it grows long beautiful plumes on its back, which were prized as decorations for lady's hats in the late 1800s and early 1900s.   Plume hunting nearly led to the demise of this egret.   Fortunately, outraged citizens forced the passage of the Migratory Bird Treaty Act in 1918 and this drastically reduced the slaughter.

The Snowy Egret mounted a remarkable comeback throughout its historical range and beyond.  It currently breeds in colonies with other herons and egrets along the Atlantic and Gulf coasts, inland along the Mississippi, in parts of the western United States, and southward throughout most of South America.

This is a partially migratory species and birds breeding in northern regions winter along the southern coast of the United States and southward.  The Snowy Egret is a locally common breeding bird in West Tennessee, but post-breeding wanderers may be found statewide.  It is usually present in the state from April through September.

Description: This medium-sized, slender, all-white heron can be best identified by its dark bill, black legs, and yellow feet. The male and female look alike.

Habitat: Snowy Egrets breed and forage around lakes, rivers, and ponds.  Breeding colonies near the Mississippi River are on islands, sandbars, or other periodically flooded sites.

Nesting and reproduction: Snowy Egrets are highly colonial and typically nest in colonies with other heron species.  They grow long graceful nuptial plumes in the spring that are used during courtship displays.  Nesting in Tennessee begins in May or June depending on flood conditions along the Mississippi.

Incubation: Both adults incubate for 20 to 24 days.

Fledging: Both parents regurgitate food for the young who are able to fly in about 30 days to follow the parents to feed.

Nest: Both parents build a flimsy stick platform nest, often placed in thick willow. Nest heights range from 5 to 16 feet. Island nest sites are preferred because they are less vulnerable to predators than mainland and peninsular sites.

Best places to see in Tennessee: Reelfoot Lake area and shallow lakes and ponds in West Tennessee. In 2009, Snowy Egrets have been observed nesting at Little Elder Island in Coffee County and at the Duck River Unit of Tennessee NWR as possible breeding birds.