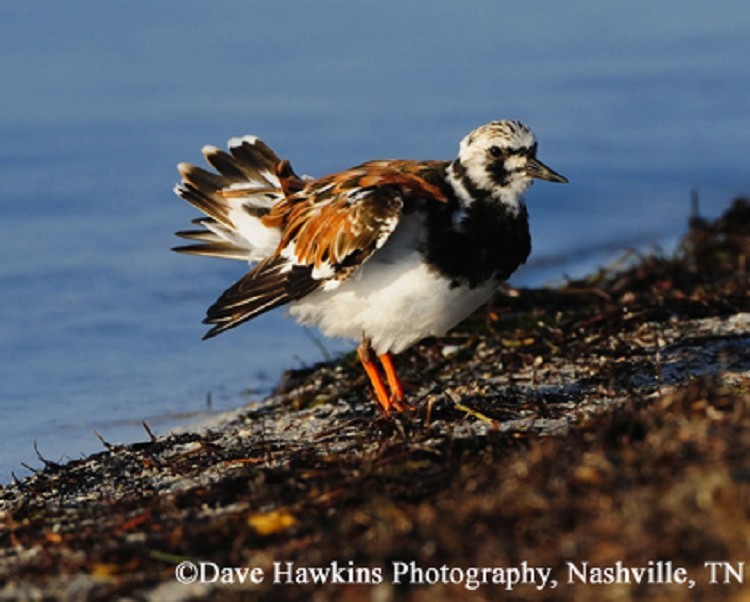 As the name suggests, the Ruddy Turnstone often forages by turning over stones and other objects.  This is a highly migratory shorebird breeding in the high arctic of Eurasia and North America and wintering on coastlines almost worldwide. The bold patterning of this shorebird makes it one of the easiest to identify in all plumages.

In Tennessee, the Ruddy Turnstone is a rare but regular migrant most likely to be found on open mud flats and sand bars in May, or from early August to mid-September statewide.

Description: This small, stocky shorebird with short orange legs, and a short, wedge-shaped, black, slightly upturned bill, has a distinct plumage in all seasons.

In breeding plumage (April-September), the back is a bright chestnut color, and the black-and-white face pattern is clown-like.

The non-breeding plumage pattern (September-April) is similar but is duller brown on the back and face.

Underparts are always white.  In flight, it has a bold white-and-dark wing pattern, a white lower back, and the tail is white with a black terminal band.

Habitat: During migration in Tennessee, they frequent open mud flats and sand bars.

Nesting and reproduction: Ruddy Turnstones nest in the high arctic, and have never been documented nesting in Tennessee.

Status in Tennessee: The Ruddy Turnstone is a rare but regular migrant statewide. In spring it is usually present only in May, but in fall can be found from early August through September and into early October. The global population appears to be relatively stable.

Best places to see in Tennessee: Traditional shorebird locations such as Ensley bottoms and Rankin WMA.