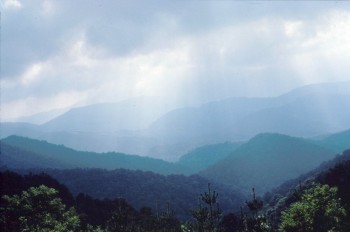 Size: 2,001 acres (810 ha).  This tract of land was purchased in 2001 from International Paper Company (formerly Champion International Corporation), who owned the property since about 1930. Prior to that it belonged to the Lambs Gulf Company and is how the property became known as the “Gulf”. It is the only forest that occurs in the Blue Ridge province. It is located in eastern Tennessee, in Cocke County near the North Carolina-Tennessee border. It is 70 miles east of Knoxville. The Martha Sundquist State Forest “Gulf Tract” is surrounded by the Cherokee National Forest on three sides and consists of one drainage system. The Forest is composed of mature mountain and cove hardwoods. A harvest rotation schedule was developed and followed closely by the previous owners and large streamside management zones, some as large as 80 acres, have been established. This tract is considered a wildlife management area and has special provisions for bear hunting. It will be used primarily for recreation, hunting, fishing, timber production, and demonstration.