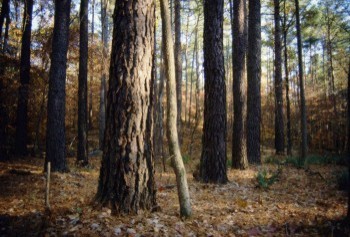 Size: 36,642 acres / 14,829 ha.  The Forest is located in central-western Tennessee, in portions of Henderson, Carroll, and Benton Counties. It is approximately 30 miles east of Jackson and is bisected by I-40. The Forest originated from lands purchased by the Resettlement Administration and became a State Forest in 1949. At the time of purchase the land was severely abused by poor agricultural practices that caused severe erosion and resulted in a deeply gullied landscape. When the Tennessee Department of Agriculture, Forestry Division took over management of the land, the emphasis for many years was on fire control and establishment of vegetation to prevent erosion. Loblolly pine, because of high rates of litter production, proved very satisfactory for that purpose and hundreds of acres of pine plantations were established. The Forest now consists of 67% hardwood types and 30% pines. Hardwood stands exceeding 60 years of age occur on 39% of the forest on land that was never cleared for agriculture or had been abandoned for farming. On the other hand, 57% support trees whose age are 10 to 60 years and probably originated on former farmland. Large areas have been salvaged as a result of approximately 7,300 acres of older age class stands being blown down to various degrees by a severe thunderstorm in 1999. There are 16 cemeteries, 62 historic sites, 1 prehistoric site, 4 ponds, and 1 primitive campsite on the forest. Hunting has been a traditional use of the forest. Other recreational uses include 28 miles of hiking trails, camping, picnicking, horseback riding and OHV use are allowed on certain marked forest roads.