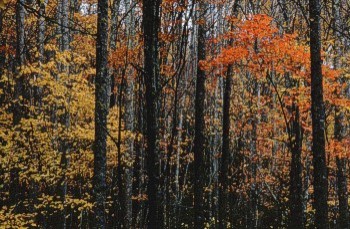 Size: 8,344 acres/3,377 ha.  This Forest had its beginning in lands purchased by the Resettlement Administration and deeded to the State in 1955. It became a State Forest in 1961. It is located on the Eastern Highland Rim in Overton and Clay Counties. The forest is approximately 20 miles north of Cookeville and is bisected by State Route 136. The majority of lands were eroded and degraded due to extensive row cropping and poor farming practices. The forested areas had been subjected to heavy timber cutting, high grading, and frequent fires. Ninety-two percent of the land is in regulated forest and 8% is unregulated forest, 0.3% in pine, and 1.6% in mixed hardwood and pine. Thirty-eight point four percent of the forest is in stands 81+ years old, 36% is in stands 61-80 years old, 10.9% is 41-60 years, 7.3% is 21-40 years old, and only 7.4% is less than 20 years old. There are 14 cemeteries and two in-holdings on the forest. Hunting has been a traditional use of the forest. Other recreational uses include hiking, and horseback riding.