We are pleased to announce that Lone Mountain State Forest has reopened to the public.

For all open state forests, we will continue to monitor activity for good health practices and physical distance to ensure visitor and employee safety. We urge the public to do their part to stay apart, and maintain proper social distancing and personal hygiene. As with the recently reopened Tennessee State Parks, we expect our visitors to follow CDC recommendations for visiting public lands. This includes: 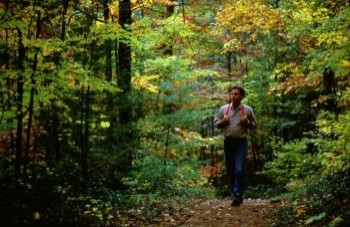 Size: 3,572 acres/1,446 ha.  Land for the Forest was acquired by the state through a tax delinquency sale by the Morgan County Chancery Court in 1929 and through a deed transfer by the Lone Mountain Land Company in 1938.  The Forest was known as the Lone Mountain Section of Morgan State Forest until 1970 when Morgan State Forest became part of the Division of State Parks and Lone Mountain became a separate State Forest.  It is located on the Cumberland Plateau in east-central Tennessee, in Morgan County, about four miles south of Wartburg, just west of U.S. Highway 27.  It is approximately 15 miles north of the Tennessee River/Watts Bar Lake and 35 miles west of Knoxville.  The land was heavily cutover and abused by the Lone Mountain Land Company during their ownership.  As a result, a hands-off management strategy has been employed on the Forest to allow it to recover and regenerate.  Between 1939 and 2002 there has been essentially no timber harvesting on the Forest, with the exception of several small timber sales from “day lighting” roads, a group selection demonstration harvest in 1994, and small salvage harvests in the mid-1970s and in 1999-2000 due to tree mortality caused by the southern pine beetle.  On November 10, 2002, a devastating tornado swept through Morgan County.  In addition to loss of lives and homes, the tornado(s) blew down about 500 acres of timber on the southwest side of the Forest.  Timber salvage operations to harvest and regenerate about 300 acres of the blown down timber were completed in 2004.  A small portion of the Forest (52 acres) is being used for seed orchards and genetic studies.  In 1957, major forest types consisted of 55% upland hardwoods, 24% of mixed hardwood-pine, and 21% of pine.  After southern pine beetle attacks in the 1970s and late 1990s, the Forest is now predominately upland hardwoods with scattered shortleaf and Virginia pine.  Near streams on the cooler, lower slopes several areas of cove hardwoods with eastern white pine and eastern hemlock can be found.  Recreational uses of the Forest include hunting, hiking, horseback riding, and mountain biking.  Approximately 15 miles of trails exist on the Forest, including an interpretive nature trail.