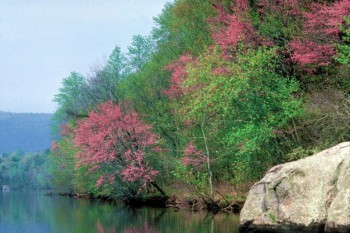 Size: 24,702 acres / 9,997 ha.  Prior to 1934, the land that is now Chuck Swan State Forest consisted of numerous small farms and parcels. In 1934 the Tennessee Valley Authority began acquiring the land in connection with the Norris Dam project. TVA sold the property to the State of Tennessee in 1952 with the understanding that the forest would be developed for multiple uses including recreation and demonstration.

Before the recent southern pine beetle outbreak and the resulting mortality, the forest cover types were about 65% hardwood (oak and hickory in particular) and 35% pine (white, shortleaf and loblolly). The Forestry Division is currently working to restore the pine component where appropriate. Approximately 6% of the forest has been harvested since 1966 and ranges in age from 1 to 38 years. An estimated 29% of the forest resulted from the reversion of abandoned agricultural fields following acquisition. These reverted fields help to make up the age classes from 50-90 years that cover more than half of Chuck Swan. About 20% of the forest stands are greater than 90 years old, the oldest around 200 years. The Tennessee Wildlife Resources Agency retains 10 in-holdings (455 acres), and actively manages approximately 1500 acres of wildlife food plots. The forest is home to 53 cemeteries, one active church congregation, one firing range (requires a permit purchased from TWRA) and miles of drivable roads. The forest also offers opportunities for hunting, fishing, horseback riding, and mountain-biking.

Within the State Forest system, Chuck Swan is the only representative of the Southern Appalachian Ridge and Valley province. It is located in northeast Tennessee, 25 miles north of Knoxville, in Union and Campbell counties and is bounded on three sides by Norris Lake. Management of the area is a joint effort between the Forestry Division and TWRA and focuses on the improvement of wildlife habitat and forest stand conditions.

Open Thursday and Friday from noon to sunset and Saturday and Sunday from sunrise to sunset.

No buckshot allowed on range. Permit required for range.