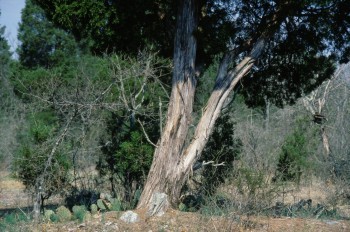 Size: 8,004 acres/3,239 ha.  The Forest is located in the Central Basin of Tennessee in the southern part of Wilson County. The forest is approximately 15 miles east of Nashville. This forest originated from the Resettlement Administration Program in 1935. Tenn. Dept. of Agriculture, Forestry Division assumed responsibility for the Forest in 1955. Before purchase by the Resettlement Administration, numerous landowners with small acreage held the land. Land use was for row crops, pasture, and forests. The farmland was impoverished by erosion and the forestland was heavily cut, burned over, and damaged by grazing. The forest is of Natural Heritage significance because it is part of the largest contiguous cedar glade-barren complex in public ownership in middle Tennessee. About 14% of the area is designated a Tennessee Natural Resource Area and contains at least two threatened or endangered plant species. The forest contains a Natural Area (1,034 acres), a state park (831 acres), several in-holdings (304 acres), 6 cemeteries, and 1 cave. The majority (85%) of the area is classified as forestland. Eastern red cedar is the predominant species and is found in pure stands on the very poor soils. On deeper soils and better sites it is found mixed in with hardwoods. No timber harvest activities have occurred, presently, on the forest. The exception is a few salvage cuts as a result of pine mortality from the southern pine beetle. The forest has been highly degraded and eroded by high Off Highway Vehicle use. As a result, OHVs have been prohibited, resulting in management and enforcement challenges for TDOA, FD. Hunting has been and continues to be a traditional use of the forest.