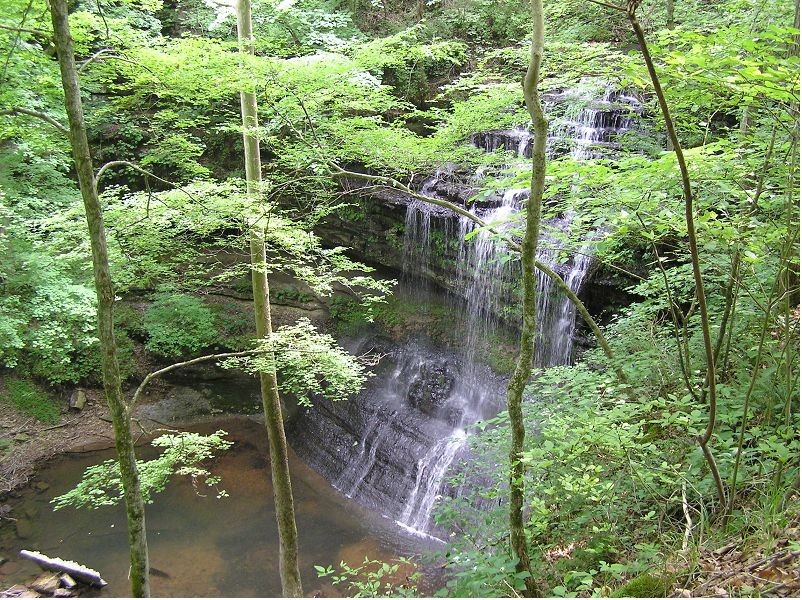 Stillhouse Hollow Falls is a 90-acre state natural area located approximately 21 miles southwest of Columbia and three miles northeast of Summertown off Hwy US 43 in Maury County. The natural area is on the Western Highland Rim in the Duck River watershed. The geology of this region creates scenic natural features such as seeps, flat shale-bottom streams, and waterfalls, both small and large, which help shape the region’s dissected topography.

The natural area is named for its most significant feature, Stillhouse Hollow Falls, which can be seen by walking approximately 2/3 of a mile along the Stillhouse Hollow Falls trail. The trail crosses an unnamed tributary that forms small scenic cascades before plunging approximately 75 feet over the falls. A deep hollow is formed below the falls that is surrounded by steep slopes where wet-weather springs emerge contributing to a rich habitat supporting a colorful spring wildflower display of trillium, spiderwort, wild geranium, phlox and many other species.

The beginning of the trail to the falls passes by a showy shrub layer of oak-leaf hydrangea (Hydrangea quercifolia), Alabama azalea (Rhododendron alabamense), deerberry and downy mock-orange (Philadelphus pubescens). The forest on the lower slopes and along the stream is comprised of a canopy of large sugar maples, sycamores, white oaks, beeches, and tulip poplars beneath which grow many species of shrubs such as spicebush, pawpaw, and alder. On the steeper slopes below the waterfall, bladdernut (Staphylea trifolia) and pagoda dogwood (Cornus alternifolia) are plentiful. The surrounding upper slopes and the steeper dry ridges are where large oaks and hickories dominate the forest canopy.

Stillhouse Hollow Falls was designated a state natural area in 2006 and is protected in perpetuity under the Natural Areas Preservation Act of 1971. It was acquired by the Tennessee Parks and Greenways Foundation (TPGF) and then sold to the State at a reduced cost. The TPGF provided a trail development grant to the Friends of Maury County Parks and the Tennessee Trails Association that facilitated opening the natural area to the public on June 3, 2006. The grant money was used to develop the small parking area, provide signage, build the kiosk, and develop the trails.

Open to the Public - Full Access
Parking and hiking trails are provided.