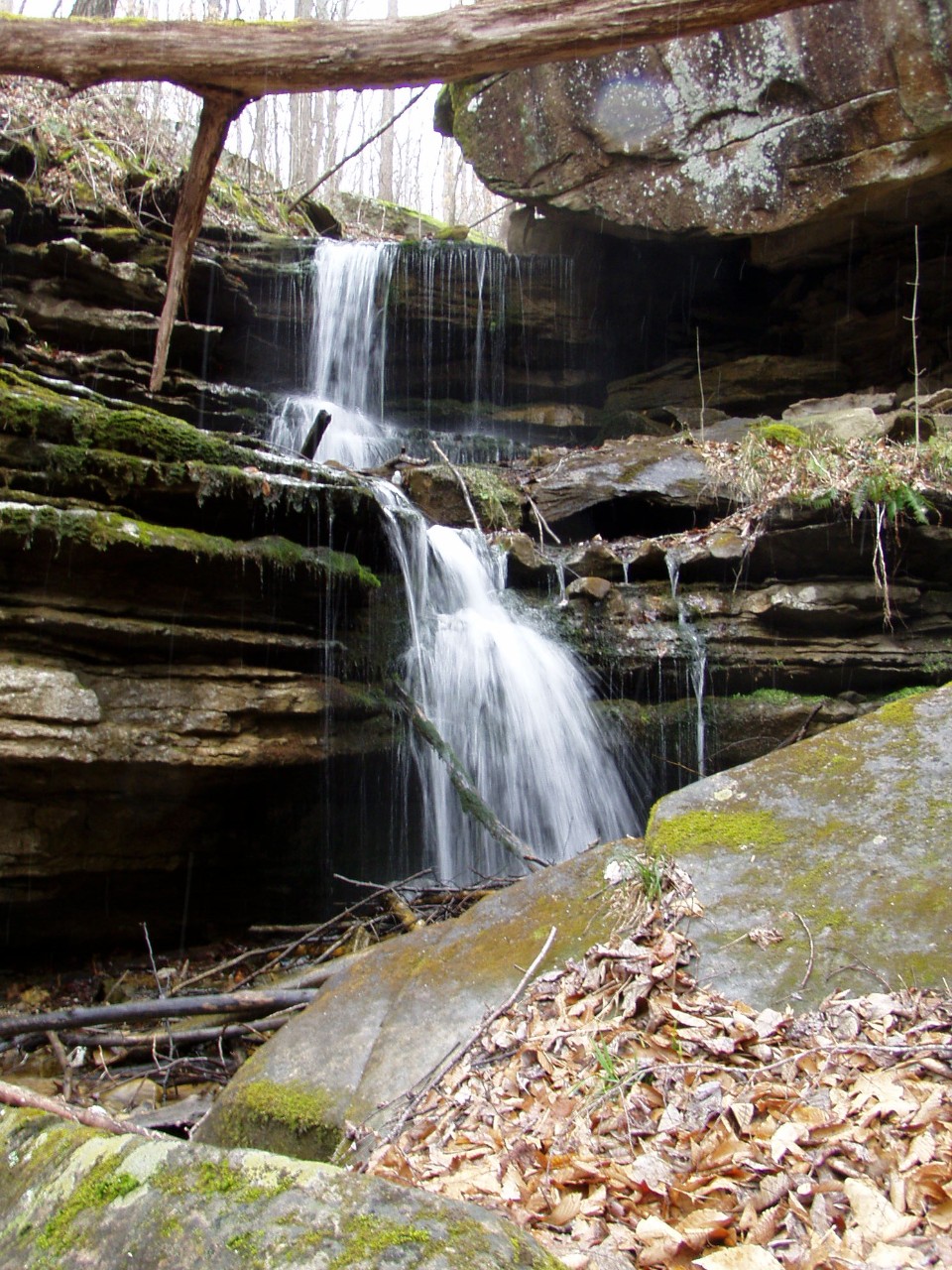 Lost Creek State Natural Area is a diverse area situated on the western flank of the Cumberland Plateau. Its scenic highlight is the beautiful Lost Creek Falls in White County. Lost Creek Falls is geologically similar to its nearby cousin, Virgin Falls, in that the creek emerges from large spring, or collapsed cave on top, drops over the 40’ falls, and disappears underground again. On the opposite side of this large sink is the spectacular entrance to Lost Creek Cave. Because these Falls and Cave open into this large sink, or bowl, with no surface drainage, cold air is trapped in the hottest and most humid times of summer, essentially wicking the water from the humid air and coating the rocks and vegetation in the bottom of the bowl with moisture. This increased moisture helps to stimulate rich ferns, flowers, and liverworts in the bottom of the sink in the late Spring and Summer. The beauty of this area attracted the Walt Disney Corporation in 1994 to film several scenes from the “Jungle Book” at the area, utilizing both the beautiful Falls and the Cave entrance.

Lost Creek Cave is one of the larger caves in Tennessee, with five entrances (including the large one in the sink), and seven miles of mapped passages. It is a popular recreational cave. It is also home to several rare species, including the federally protected Indiana bat. Because of the population decline of cave-dwelling bats, the cave is closed during the hibernation and swarming time of bats. Recreational access is allowed during other times of the year, but a no-cost permit must be obtained from the Nature Center at Fall Creek Falls.

Geologically, this area is on the flank of the western Cumberland Plateau. It has several other collapse features on the landscape which define it as a transition between the harder sandstones of the Plateau proper, and the more soluble limestones found on the Highland Rim. The water, which creates Lost Creek Falls, is coming from the Dog Cove area, a large cove of appearing, then disappearing creeks, just north of the Lost Creek Natural Area. Almost all of the Natural Area is covered with a diverse community of mixed hardwoods, including Butternut, Tulip tree, Sycamore, Sweetgum, Hemlock, a variety of Oaks, and Hickory. Wildflowers are abundant in the Spring. Ferns and mosses are rich in the area.

Lost Creek State Natural Area was obtained by the public thanks to the generosity of James and Lillian Rylander, and their family. Mr. Rylander put this area in his will, that upon his death, it would be transferred to the State, for the area’s protection and its enjoyment by the public. We are very thankful for this incredible gift.

This area is actually connected to the larger 57,000-acre land base informally called the “Mid-Cumberland Recreation Area”. This larger area is managed by TWRA, the TN Division of Forestry, and State Parks. It would be possible to hike from this area over to Virgin Falls, or on down to Fall Creek Falls State Park, and never leave public land. However, at this point, there are no trails connecting these areas.

Open to the Public - Full Access
The area is open year round, and has about 1 mile of trail on the property. The area closes at sundown, and reopens at sunup. There is no camping on the property, at this time.

From Sparta, get on E. Maple just south of the White County Courthouse, go one block, and turn right (south) down Young Street. Head south out of town. Young Street turns into Hickory Valley Road. Go 3.4 miles to a split in the road, and turn left where Lost Creek road bears off to the left (east). Go 5.6 miles and Lost Creek Road makes a hard right. (The road straight ahead is marked “Dead End.”) Turn right (south) and go 2.4 miles and you will enter the State Natural Area. The Parking Lot is another 0.3 miles on the right. GPS of parking lot: N35 50.442, W85 21.660.