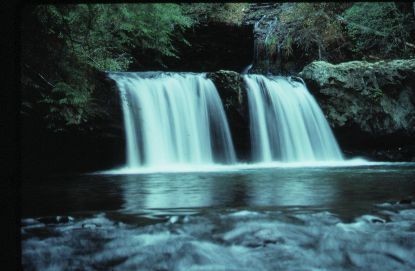 Grundy Forest is a 234-acre natural area located in Grundy County. In 1935, it was donated to the State by the town of Tracy City to accommodate a Civilian Conservation Corps (CCC) camp. The CCC built the picnic shelter here in the 1930s. The State originally managed the site as Grundy State Forest. The management responsibility was transferred from the Division of Forestry to the Division of Parks and Recreation in 1978. It eventually became part of the South Cumberland Recreation Area. The natural area serves as the northern trailhead of the Fiery Gizzard Trail that connects with the TVA Foster Falls Small Wild Area at the southern trailhead 12 miles away.

The area features cascading streams, waterfalls, rockhouses, rock formations, hemlock cove forest, dry upland pine forest, and steep cliffs. Several waterfalls can be found including Hanes Hole Falls, Blue Hole Falls (10 feet) and Sycamore Falls (12 feet). The cool gorge also contains the Cave Springs Rock House, where nearby there stands a 500-year-old hemlock. Other interesting features include a five-feet-wide by 30-feet-deep gorge named the Black Canyon, and the Chimney Rocks, which are rock formations that range from 25 to 60 feet tall. The area is recognized for its diversity of wildflowers, mosses and liverworts, and its wildlife.

Open to the Public - Full Access
The natural area is operated by Tennessee State Parks. There is parking, several miles of hiking trails, backcountry camping, and a picnic shelter available.