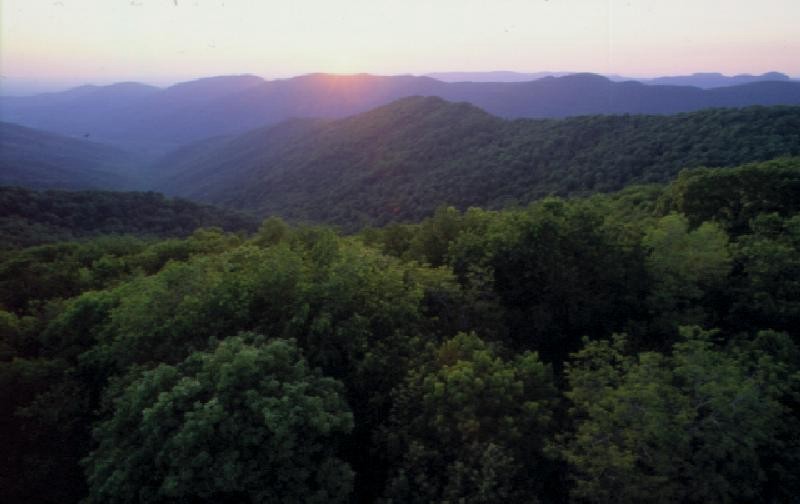 Frozen Head state natural area contains a both Class I (8,620 acres) and Class II (6,530 acres) designations and is located in Morgan County. An additional 7,650 acres comprises Frozen Head State Park, which lies entirely below 1,600 feet elevation. Frozen Head is one of the crown jewels of Tennessee’s Cumberland Mountain range and is an excellent example of what pre-settlement conditions might have been like in this area hundreds of years ago. The Cumberland Mountains occupy the northeast section of the Cumberland Plateau and rise more than 1,000 feet above the Plateau's tablelands. The highest peak in the natural area occurs on Frozen Head Mountain at 3,324 feet elevation above mean sea level. Thirteen other peaks in the natural area also rise above 3,000 feet elevation. The name “Frozen Head” derives from these high peaks often being capped with a shroud of snow or ice in winter.

The lowest elevation is at the Flat Fork access at 1,340 feet. The deep hollows and valleys here provide rich forest habitats and forest community types. Those most prevalent are the many different mixed mesophytic forest communities that include hemlock, white pine, tulip poplar, sugar and red maples, many species of oaks and hickories, yellowwood, yellow birch, ash, walnut, blackgum, beech, sourwood, basswood, magnolias, and black cherry. A mesic oak forest occurs as basswood and buckeye begin to dropout on the mid and upper slopes. White oak becomes the dominant tree here along with tulip poplar and other species commonly found in the mixed mesophytic forest. At higher elevations and on dry slopes and ridges, scarlet and chestnut oaks become more common along with shortleaf pine.

Frozen Head is a favorite destination for spring wildflower walks and birdwatchers. The spring wildflower display rivals the Smokies. This large unfragmented forest provides nesting habitat for many neotropical migrants like the cerulean warbler. There are almost 60 miles of trails that meander through the natural area, many of which were constructed by the Civilian Conservation Corps in the 1930s. Animal life is also abundant at Frozen Head as many species of birds, reptiles and amphibians are found in diverse habitats. The area contains significant mature forest and rare plants, and is one of the least disturbed areas remaining within the Cumberland Mountains of Tennessee.

Open to the Public - Full Access
Camping by fee through reservation system.

From Oak Ridge, take State Route 62 west toward the towns of Oliver Springs and Wartburg. Keep going straight past State Route 116 which turns north toward Petros. About 6 miles past the road to Petros, you will see signs for Frozen Head. Turn right onto Flat Fork Road and continue straight down the valley to the park and natural area.