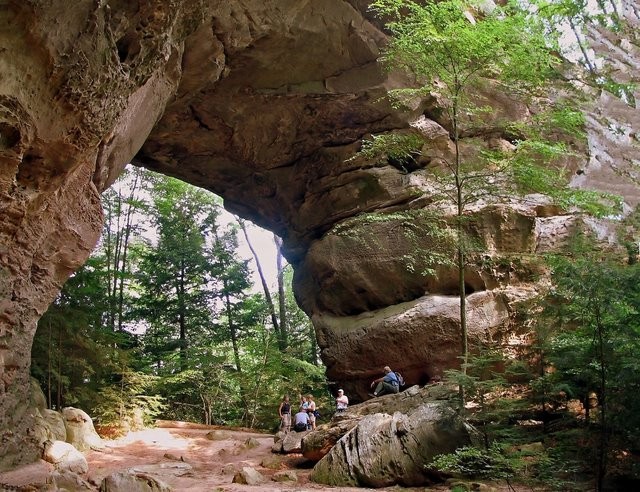 Twin Arches is a 1,500-acre natural area located in parts of Fentress, Scott, and Pickett Counties and contains two impressive geological formations known as the Twin Arches. These arches form the largest natural bridge complex in Tennessee and one of the largest known in the world. The two sandstone arches are situated end-to-end, and are commonly referred to as the North and South Arches. The South Arch is the tallest at 103 feet high. It has a clearance inside the arch of 70 feet and its span is 135 feet between the inside base of the feet. The North Arch is 62 feet high with a clearance of 51 feet and a span of 93 feet.

The tops of the arches support vegetation adapted to dry conditions and include a mixed pine-oak-heath community and a fragile moss-lichen community. The heath component is primarily comprised of various blueberry shrubs (Vaccinium spp.) and huckleberry (Gaylussacia spp.). The vegetation appears stunted because of the harsh conditions related to rock outcropping and shallow soil. The moss and lichens that cover exposed sandstone are subject to trampling, and visitors should exercise caution where they walk to minimize impact. The vegetative cover on the plateau along the trail from the parking area to the arches is dominated by scarlet oak along with chestnut and white oak, red maple, sourwood, blackgum, and Virginia and shortleaf pine.

The arches rise high above the deep gorge that was formed over geological time by the many tributaries that cut into the sandstone while draining into the South Fork of Cumberland River. These tributaries include Charit Creek, Andy Creek, Middle Creek, and Mill Creek. They provide ample site conditions to support moist, rich, mixed forest communities within the gorges. Another significant geological attribute is the occurrence of numerous sandstone rock houses formed below the bluffs. There are also sandstone barrens scattered along the top of the gorge bluffs that support populations of needlegrass, little bluestem, and blazing star. Rare species including the Lucy Braun snakeroot (Ageratina luciae-brauniae) and Cumberland sandwort (Arenaria cumberlandensis) occur at Twin Arches. The scenic views from the arches of forest and the vast gorges are additional attractions of the natural area. It is also a unique area for birding, as you can sit on the arches and you look down into a mature forest canopy where warblers flitter below. Twin Arches is one of two designated state natural areas in the Big South Fork Recreation Area that are managed by the National Park Service.