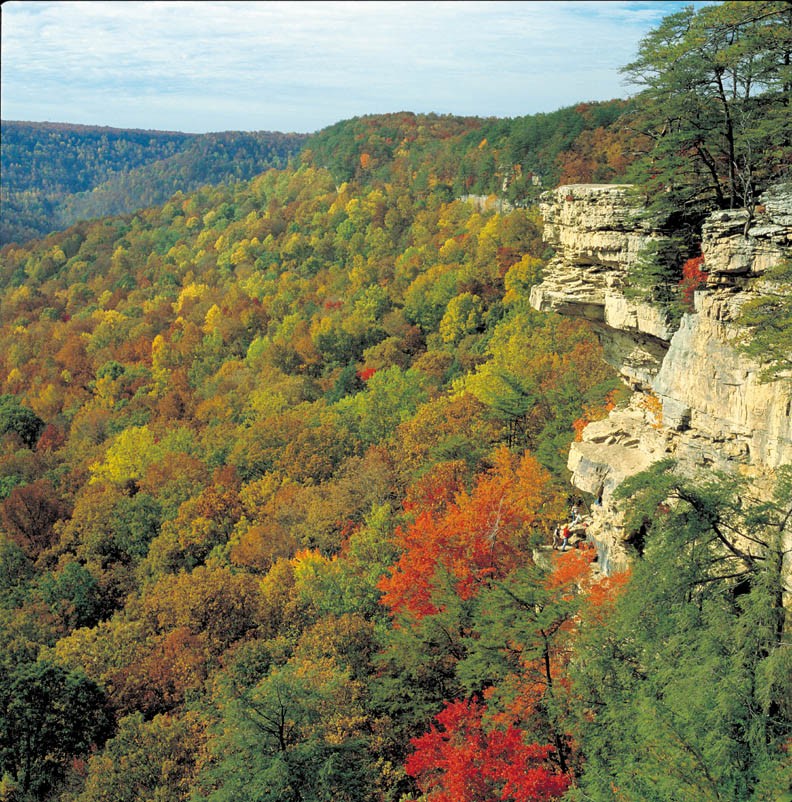 Savage Gulf is 15,590-acre natural area located in Grundy and Sequatchie Counties. Carved like a giant crowfoot into the western edge of the Cumberland Plateau, it is one of Tennessee's most scenic wilderness areas. Its sheer sandstone cliffs and rugged canyons provide extraordinary views. A significant feature is Stone Door, a 10 ft. wide by 100 ft. deep crack, forming from the top of the escarpment into the gorge below. It looks like a giant door left ajar and was once used by Indians as a passageway. Breathtaking waterfalls form at the head of many gorges, where streams drop off over hard sandstone cap rock. Greeter Falls drops over a 15-foot upper ledge and then plummets over a 50-foot lower ledge into a cold, clear plunge pool. Savage Creek enters its gorge over cascades and drops 30-foot at Savage Falls. Collins River and Ranger Creek have waterfalls that drop over limestone ledges and flow into sinks where they disappear. Big Creek, Collins River and Savage Creeks each tumble down over 5 miles, dropping over 800 feet through narrow gorges, forming the "Gulfs." Observed from a 750 overlook, Big Creek mysteriously disappears below. Many other big streams go underground cutting through shale and limestone to form dry creek beds. Sudden heavy rainfall however can result in flash floods, and streams can become very dangerous.

While much of the gorge is second growth forest, there is one large section of old growth mixed mesophytic forest in the gorge. The gorge forests abound with oaks, hickories, maples, yellow poplars, hemlocks, pines and many other tree species. Beneath the forest canopy is a vast array of shrubs, vines, wildflowers, mosses and ferns. Collins Gulf is noted for its spectacular display of spring wildflowers. In the uplands, an old growth short leaf pine forest is found where red cockaded woodpeckers once nested. The natural area is a part of the South Cumberland State Park. Savage Gulf is also on the Registry of National Natural Landmarks.

Open to the Public - Full Access
The natural area is operated by Tennessee State Parks. Four parking areas, over 50 miles of hiking trails, backcountry camping, and picnic areas are available. Trail maps are available at the SCRC visitor center.

The Stone Door Entrance is accessed via Highway 56 in Beersheba Springs. Turn on Stone Door Road and proceed straight to the area's entrance. This natural area is a part of the South Cumberland Recreation Area. The Savage Gulf entrance and ranger station is located halfway along Highway 399 between Cagle and Gruetli-Laager.