The Indiana Bat is one of 2 endangered bat species in the state (along with Gray Bat).   They occur primarily in eastern and middle Tennessee.

Description:  A small bat with dull grayish brown to black fur, which is fine and fluffy.   When the fur is parted it appears as a 3 color pattern: basal part of hair is brownish black, middle is grayish, and a cinnamon brown tip.   Below the fur has a pinkish white cast.   Ears are medium sized with a short, rounded tragus (membrane inside ear).   The wing membrane reaches the base of the toes and the calcar (small bone that projects from the inner side of the hindfoot) is strongly keeled.

Habitat:  They winter in the largest and coolest limestone caves, and prefer areas in the cave with high humidity.   They rarely inhabit buildings or other man-made structures.   Females deliver their young in hollow trees or beneath tree bark.

Diet:  Indiana Bats prefer moths (especially females while lactating), but also eat a variety of other insects including beetles, caddis flies, and other flies.

Breeding information:  Between early August and mid-September, Indiana bats arrive near their hibernation caves and engage in swarming and mating activity.  Females store the sperm in their body until spring delaying the fertilization.   One young is born in late June to early July, and usually raised under the bark of a dead tree.   Weaning occurs after a month and the pups are completely independent after 2-3 months.

Status in Tennessee: Indiana Bats are listed as Federally Endangered.   The population is estimated at less than 400,000 individuals, with the majority hibernating in only seven caves in the state.   Also, White Nose Syndrome, caused by the fungus Geomyces destructans, has greatly affected many bat populations in the Northeast, and has already spread to Tennessee.

Fun Facts:
•The Latin species name sodalis means "companion" and refers to the Indiana Bats tendency to hibernate in large, dense clusters.
•However, females do not form large breeding colonies in the summer like other bats.

Best places to see in Tennessee:
Cave entrances from early August to late October, as bats swarm before hibernation. 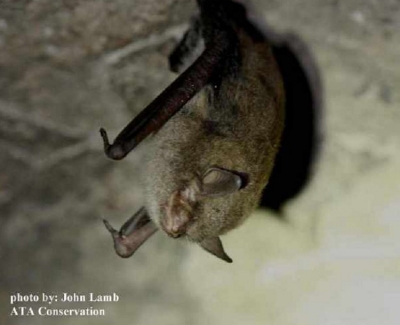 The Indiana bat, Myotis sodalis, is listed as an endangered species by the U.S. Fish and Wildlife Services.   Like many of the bats that make Tennessee their home, Indiana bats spend the winter in caves across middle Tennessee.  Larger winter populations can be found in east Tennessee.

Learn More About Indiana Bat Migration and Summer Habitat Use