The Northern Long Eared Bat can be distinguished from the other five similar Myotis species by its longer ears, as its name suggests. This bat occur state-wide.

Description:
A medium-sized bat with relatively long rounded ears, which extend past the tip of the nose when laid forward.   The tragus (membrane inside ear) is long and pointed. It has dull brown fur with a slightly paler or grayish belly, and dull brown shoulder spotting.

Similar Species:
The Myotis bats are difficult to differentiate from one another, but the Northern Long-eared Bat can be distinguished by its longer ears.

Habitat:
Winters in caves and mines that are cool and moist. In summer, they roost in a variety of shelters including barns and attics, and under tree bark or shutters.   They usually roost singly, except for small maternity colonies.   They seem to prefer tight crevices and holes, although they will also frequently hang out in the open.

Breeding information:
Mating usually occurs in the fall before hibernation.   Females store sperm in their uteri during hibernation and pregnancy will begin after they emerge in the spring.   The gestation period usually averages 55 days.   Only one young is produced by females each year usually in June or July. Newborn bats are blind and lack fur.   The young are nursed for about a month until they are able to fly and feed on their own.

Status in Tennessee:
Northern Long-eared Bats, which are uncommon in Tennessee, were federally-listed as a threatened species in April of 2015.

Fun Facts:
•Northern Long-eared Bats have been known to live up to 18 years.

Best places to see in Tennessee:  In caves or attics or under shutters or tree bark. 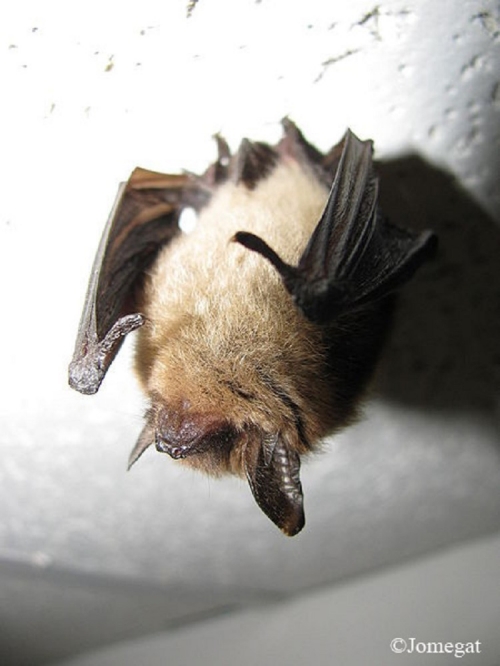