The Eastern Small Footed Bat is is the smallest Myotis in Tennessee and the smallest bat in the eastern U.S.   Their tiny feet distinguish it from all other bats. It occurs primarily in eastern and middle Tennessee.

Description:  A small bat with very small feet and a distinct black mask across the face to the black ears.  The fur is yellowish brown and glossy, and the bases of the hairs are blackish when parted.   The wing and tail membrane are very dark brown.

Habitat: They hibernate in caves or mines, especially near entrances. Also, found in cave floors, cracks, and crevices.   Summer roosts and nursery sites include caves, buildings, and cavities in the ground or beneath rocks.

Diet: Feeds on beetles predominantly, but also flies, mosquitoes, ants, and other insects.   Unlike most bats, Eastern Small-footed Bats feed 3-9 feet above the ground in slow, repeated patterns.

Breeding information: Their breeding biology is not very well known, but they breed in fall before hibernation like other Myotis.   Delayed fertilization occurs, and a single young is born to each female between May and July.   Small nursery colonies consist of usually fewer than 20 bats.

Status in Tennessee: Eastern Small-footed Bats are rare throughout their range.   They are Deemed in Need of Management by both Tennessee Department of Environment and Conservation, and TWRA.

Fun Facts:
•When hanging from a cave wall (or other surface) the forearms are extended, whereas other bats usually hang with their wings parallel to the body's axis.
•Eastern Small-footed Bats are one of the last species to enter caves in the autumn and the earliest to leave in spring.

Best places to see in Tennessee: Near cave entrances, under cave rocks, or in cracks of cave floors. 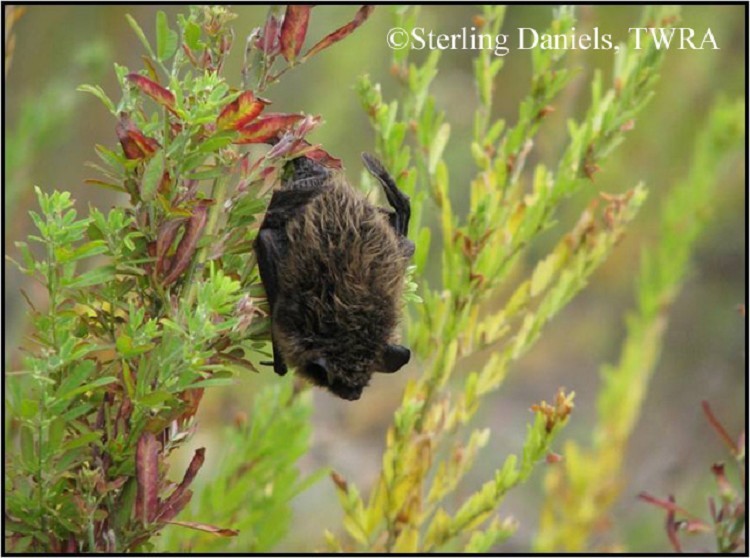