The Gray Bat is one of the 2 endangered bats in Tennessee (along with Indiana Bat). It is the largest of the "mouse-eared bats" in Tennessee, and its grayish overall color helps distinguish it from other Myotis bats.   Gray Bats primarily occur in eastern and middle Tennessee.

Description:  A medium-sized short-eared bat, which has grayish-brown fur, sometimes russet in summer.   It is the only Myotis species which shows a nearly uniform dark grayish-brown color all the way to the base of the hair, and has the wing attached at the ankle joint.   Also, each claw on the hind foot has a prominent notch.

Habitat: Inhabits caves year round, but they usually use different caves for winter and summer residence.   They will sometimes use man-made tunnels as their summer quarters.

Diet: Gray Bats feed on a variety of insects, but are partial to mayflies and stone flies.   They will also eat mosquitoes, caddis flies, beetles, moths, flies, and other aquatic insects.

Breeding information: Mating occurs in the fall and females enter hibernation soon after breeding.   Females store sperm throughout the winter and become pregnant after emerging from hibernation.   Pregnant females each deliver one young, usually in May or June.   The young begin to fly after about 3 weeks and are weaned in July or August.

Status in Tennessee: Gray Bats are listed as Federally Endangered.   The majority of the Tennessee Gray Bat population uses only eight caves for hibernation, making this species very vulnerable to habitat destruction.   Also, White Nose Syndrome, caused by the fungus Geomyces destructans, has greatly affected many bat populations in the Northeast, and has already spread to Tennessee. 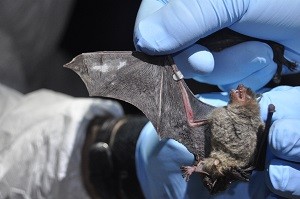 The gray bat, Myotis grisescens, is listed as endangered by the United States Fish and Wildlife Service.   Unlike many of species of bats that inhabit Tennessee, the gray bat uses caves throughout the year in Tennessee.    During the summer, gray bats form large maternity colonies in caves where the females give birth to the pups, raising them until they can fly, or become volant.    At this same time, male gray bats form bachelor colonies in the same caves as the females or these colonies may be found in different caves.