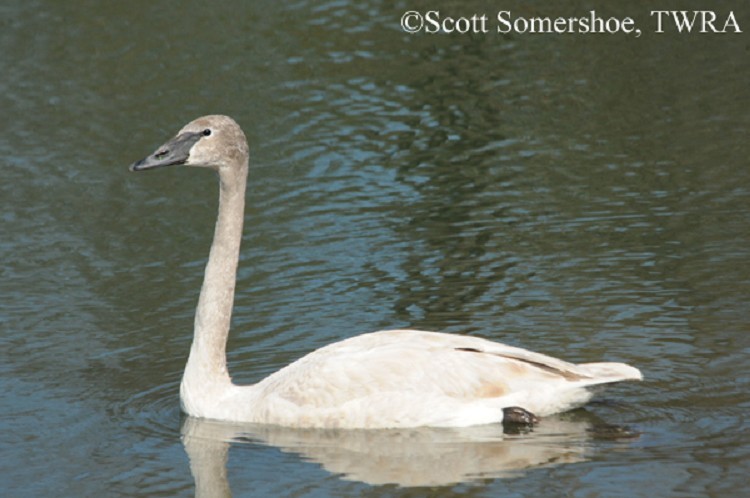 The Trumpeter Swan is the largest waterfowl species in North America.  It was once abundant and ranged across the northern prairies of North America, but was nearly driven to extinction by the end of the 19th century due to unregulated hunting and the millinery trade (swan feathers were popular in lady's hats and made the best quill pens).   Due to intensive reintroduction efforts in the Midwest, the species is making a comeback.

John James Audubon himself reported the first Trumpeter Swans in Tennessee on November 1820.  The species was not seen again in the state until December 2001 when a family of two adults and an immature were found in Lauderdale County. Unfortunately, two of these birds were mistaken for Snow Geese and shot.

Additional sights, mostly from the western part of Tennessee, were confirmed in 2003, 2004, 2009, and 2010 from Dyer, Lake, Madison, Sullivan, and Washington Counties, from late December through early March.

Though still a very rare bird in Tennessee, as the eastern population continues to increase, additional sightings are expected. It is illegal to hunt any species of swan in Tennessee.

Voice: The name of this swan comes from its deep trumpeting call.

Nesting and reproduction: The Trumpeter Swan has never been known to nest in Tennessee.

Status in Tennessee: Trumpeter Swans are extremely rare in Tennessee, but there have been several records in the past 10 years. In the winter of 2010, there were 3 occurrences in Tennessee: 3 birds in Dyer and Lake Counties, and 1 immature in Madison County. Recent records have been from late December through early March. It is illegal to hunt any species of swan in Tennessee.