“Thanks to the avibirds.com team for this great video!”

The Mute Swan is an exotic species in North America.   It is native to Eurasia and was introduced to this continent from the mid-1800s through the early 1900s.

Individuals were imported to many areas of North America as an adornment to city parks and large estates, and for zoos and aviculture collections.  All North American feral Mute Swan populations originated from the release or escape of individuals from these early captive flocks.

The largest concentration of Mute Swans now occurs along the Atlantic Coast from Maine south to the Carolinas.  Populations have increased dramatically since the 1970's and show few signs of slowing.  Smaller flocks occur in the Great Lakes region and the Pacific Northwest.

As an exotic, feral species, the Mute Swan has had significant effects on the ponds and lakes they inhabit.  Potential effects range from overgrazing aquatic vegetation to displacing native waterfowl.

Description: A large white swan, generally unmistakable in Tennessee. Distinguished from other swans by its long, S-curved neck and its orange red bill with a large, black, basal knob.

Nesting and reproduction: Pairs vigorously defend territories and their young throughout the nesting cycle. Not known to commonly nest in Tennessee.

Fledging: Cygnets leave the nest shortly after hatching and are capable of swimming within hours of hatching.

Nest: Nest is an open bowl in a large mound of aquatic vegetation, lined with softer vegetation and a little down. Usually placed on mound on bank, island, or reed bed.

Status in Tennessee: Exotic bird not native to Tennessee. Rarely found across the state and any populations located need to be monitored closely. 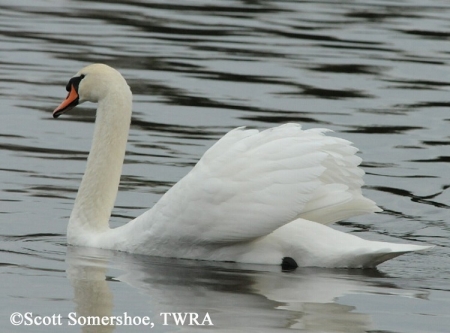 Best places to see in Tennessee: They are rarely found in Tennessee with no regularly known breeding populations.