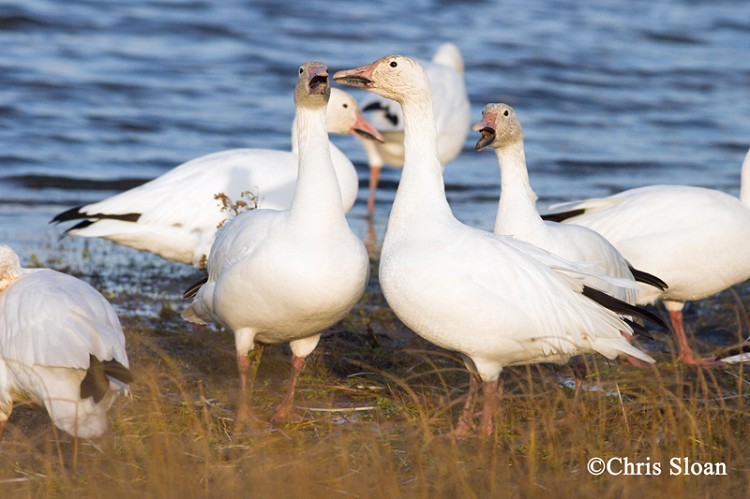 The Snow Goose is a medium-sized goose that breeds on the high arctic tundra of North America and northwestern Greenland. They migrate through and winter in several areas of the United States and Mexico, including Tennessee.  Their noisy, high-flying “V” shaped flocks sound like baying hounds.

This goose comes in two color forms; one white, the other dark. The white form is more common than the “blue” form.

Populations have been growing exponentially, especially around Hudson Bay.  Their numbers are becoming so large that the geese are destroying nesting habitat. Current estimates place the population between 5 and 6 million, a number that may be environmentally unsustainable.

Description: The white morph is white overall, except for black primary feathers in the wings. The “blue” morph has a white head and neck, and a dark gray-brown body.  Both color forms have a pink bill, dark pink legs, and dark eyes.

Immature birds (August - January) are variable, but are usually dingy gray on the upperparts and white below, with a dark bill.

Voice: The call is a harsh, one-syllable whouk, harsher than other geese.

Habitat: In Tennessee they are found around grain fields, lakes and rivers.

Nesting and reproduction: The Snow Goose has never been known to nest in Tennessee.

Best places to see in Tennessee: Snow Geese can be found during the winter across Tennessee, especially on state and federal waterfowl refuges in the western part of the state.