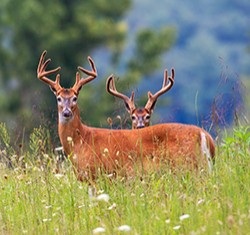 CWD has no known risk to the health of humans or livestock, however it is deadly for cervids. The disease was first recognized in 1967 in captive mule deer in Colorado, and has since been documented in captive and free-ranging deer in 26 states and 3 Canadian provinces, as well as Norway, Finland, and South Korea.

In December of 2018, following the confirmed detection of CWD in ten wild deer in southwestern Tennessee, TDA implemented emergency rules to prevent further spread of the disease.

To further protect the captive cervid industry, the department will draft permanent rules based on USDA’s CWD program standards and input from stakeholders.

You can also read the complete rules of health requirements for admission and transportation of livestock and poultry, which include requirements related to CWD.

For more information about the Tennessee Wildlife Resources Agency's response to CWD in the wild deer and elk population, log onto www.CWDinTennessee.com.

CWD Requirements in Each State