Description: A small, plain-looking snake (7.0 to 10.0 inches in length) with a narrow head, 6 labial scales (upper lip), and loreal scales (in front of eyes) that are horizontal and touching the eye.   Eastern Smooth subspecies is mostly gray or light brownish-gray, with tiny black dots scattered on the back, and smooth scales (except on back near tail).

Western Smooth subspecies is reddish to grayish-brown with weakly keeled scales.   Both subspecies have a white or cream-colored belly, but the Western Smooth Earthsnake has a pale greenish-yellow tint.   Young are similar to adults and do not have markings.

Similar Species: Rough Earthsnake has strongly keeled scales and 5 upper labial scales.  DeKay’s Brownsnake has dark spots on the back and no loreal scales.  Ring-necked Snake has a yellowish ring around neck and a bright yellow belly.  Eastern wormsnake has smooth scales and a sharply contrasting belly.

Habitat: Found in a variety of habitats including rocky hillsides, pine and hardwood forests, forest edges, fields, and some suburban areas. These snakes, which are similar to Rough Earthsnakes, are secretive, burrowers that spend most of their time under rocks, leaf litter, logs, or trash.

Breeding information: Mating takes place in the spring and early summer. Females give live birth to litters ranging from 2-14 young during late summer to early fall.

Status in Tennessee: Appears to be relatively common, although its secretive nature can mask this detail. Domestic cats prey upon this species regularly; population effects unknown.

Best places to see in Tennessee: Frequently found under boards and sheet metal roofing that are located in rural or grown up lots. 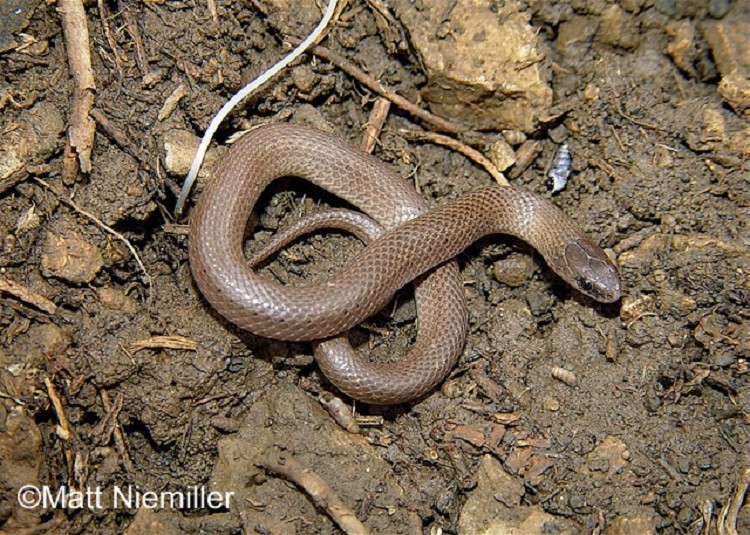