Description: A small, shiny, smooth-scaled snake (7.5 to 11.0 inches in length) with a sharp contrast between brown back and pink belly; often having an iridescent sheen. Head is small and pointed with tiny eyes. Tail is short and pointed. Young are darker and smaller. Eastern Wormsnake has separate prefrontal and intranasal scales (scales between nose and eyes), while the Midwestern Wormsnake’s are fused.

Similar Species: Ring-necked Snake has complete or partial golden-colored ring around the neck. Rough and Smooth Earthsnakes have rough scales. Northern and Midland Brownsnake have small, downward, dark streak on side of head.

Habitat: Under rocks, rotten logs, leaf litter, and other debris of hardwood forests, usually moist. Prefers to remain underground or under cover.

Diet: Mainly earthworms; but may eat grubs, insect larvae, and other soft-bodied prey.

Breeding information: Not well known due to secretive nature. It is believed that they mate in fall and spring with the female laying up to 12 eggs under rocks, logs, or other litter in the summer. Young hatch in late summer or early fall.

Status in Tennessee: Appears to be common, although difficult to assess due to their secretive, underground life.

Best places to see in Tennessee: Under rotten logs in the Unaka Mountains.

Atlas of the Reptiles of Tennessee

The Snakes of Tennessee web site 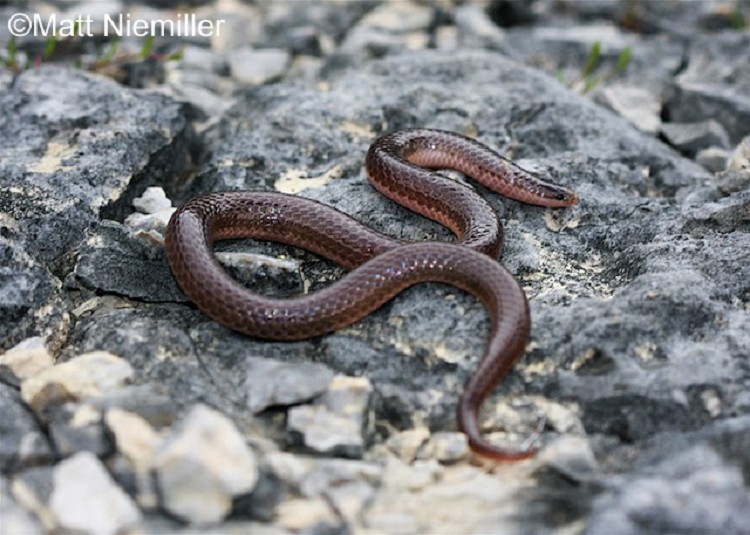