The Rough Earthsnake is a plain-looking snake and occurs only in a few counties in the southwestern corner of the state, mostly around the city of Memphis.

Description: A small, keel-scaled snake (7.0 to 10.0 inches in length) which is gray, brown, or reddish- brown and has a pointed snout.   Identity can be confirmed by 5 labial scales (upper lip) and loreal scales (in front of eyes) that are horizontal and touching the eye.

Belly is cream-colored or light gray.   Males have a longer tail than females.   Young are darker and grayer, and have a light band across the back of their head.

Habitat: Found in a variety of habitats including rocky hillsides, pine and hardwood forests, forest edges, and suburban and urban areas. Rough Earthsnakes are secretive, burrowers that spend most of their time under rocks, leaf litter, logs, or trash.

Breeding information: Courtship and mating occurs in April and May. Females are ovoviviparous (give live birth) and deliver 2-9 young during late summer or early fall.

Status in Tennessee: Range is very limited in Tennessee; appears to be fairly common in the Memphis area. Not considered threatened as these snakes have adapted to human environments in large cities.

Best places to see in Tennessee: Under cover of stones or woody debris in the Metropolitan area of Memphis 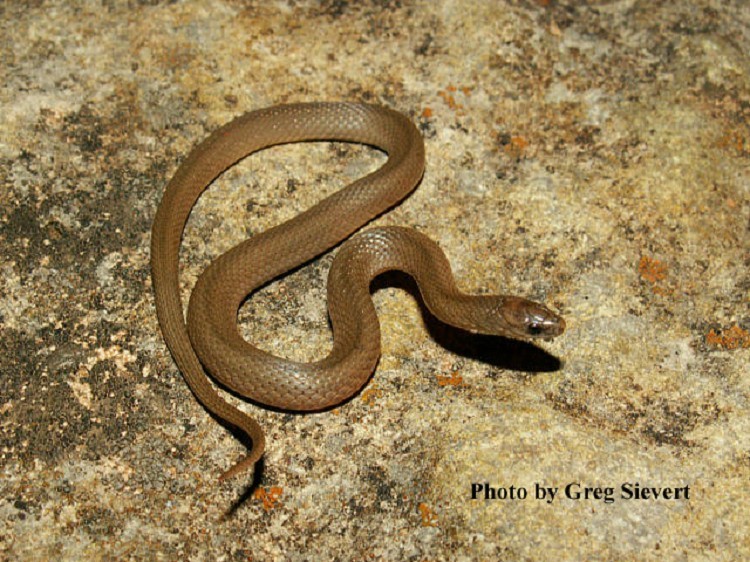